- The US Dollar’s earlier gains around the December US Nonfarm Payrolls report were erased this morning after Fed Chair Jerome Powell spoke at the American Economic Association’s Annual Meeting.

- Fed Chair Powell’s tone has changed numerous times in recent months, but the latest shift can be easily described as the ‘Powell Put’ being triggered.

- Retail traders continue to sell the US Dollar, fading advances by EUR/USD and GBP/USD.

The US Dollar (via the DXY Index) had a soft start to the first full week of 2019 but trading on Tuesday is offering a minor reprieve. Amidst an otherwise quiet economic calendar – there are no ‘high’ rated events during the North American trading session – all attention is on news coming out of Beijing, China, where Chinese and US officials are meeting to discuss ways to end the trade war.

Coming in the midst of a 90-day period of détente, the latest efforts to end the US-China trade war have left traders feeling optimistic so far. After Chinese Vice Premier Liu He attended the trade talks in person yesterday, US Secretary of Commerce Wilbur Ross said that “there’s a very good chance that we’ll get a reasonable settlement.”

Ahead of the US cash equity open, stocks are pointing higher modestly, and reduced safe haven demand for the Japanese Yen is giving USD/JPY some room to recover, thereby keeping the DXY Index’s recent consolidation intact.

Elsewhere, with November German Industrial Production slumping (unexpectedly) sharply and December Eurozone Confidence readings dropping all-around, EUR/USD has been held back and remains within the downtrend from the April and September 2018 highs. Meanwhile, with the UK government setting a January 15 vote date for UK PM Theresa May’s Brexit deal, and yet no clear path to the Brexit deal getting approval, GBP/USD is coming back down amid fresh concerns that resolution is nowhere in sight.

Otherwise, much of Tuesday will be about the building anticipation to US President Trump’s primetime address to the nation over the US government shutdown. FX markets could be in for a jolt after the start of Asian trading on Wednesday. 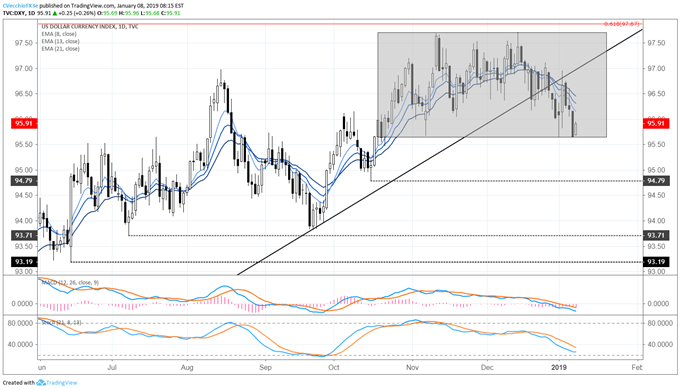 The DXY Index has indeed remained within its near-three-month consolidation between 95.65 and 97.72, and yesterday’s move back to range support marks the second attempt in the past week to breakdown.

Despite no breakdown yet, it would still appear that a bearish resolution is still more likely in the near-term. The rebound at the start of January failed to retake its uptrend from the April and September 2018 lows, resulting in the DXY Index falling back below its daily 8-, 13-, and 21-EMA envelope. Accordingly, both daily MACD and Slow Stochastics continue to point lower as they trend deeper into bearish territory. It thus remains that a breach of the weekly low of 95.65 is needed to validate the bearish bias into a call for a top.