- After trading sideways for two months, Gold was able to clear out the former December 2017 low at 1236.37, having previously closed below it every session since July 17.

- However, bulls may be seeing the first test of the bullish breakout attempt, as 1236.37 is nearby, as is the daily 21-EMA and the rising trendline from the November 13 and 28 swing lows.

- Retail trader positioning points to further losses for Gold in the days ahead.

Gold prices traded sideways for two months but, even as the US Dollar moved back towards its 2018 high, they were able to climb back above key prior resistance in early-December, marking a bullish breakout and veritable attempt at bottoming out of the downtrend since April.

Watch Oil Prices as a Cue for Inflation Expectations

If there is one other asset class to watch as Gold prices attempt to bottom, its energy. Crude Oil has turned higher in recent days as well, bucking its downtrend since the start of October (as measured by closing above its daily 8-EMA on December and its daily 13-EMA on December 13 in the form of a bullish outside engulfing bar).

HIstorically, one of the appeals of holding Gold over a long-term horizon is that it acts as a hedge against inflation. If energy prices have arrested their decline, so too will inflation expectations, which should give Gold prices more breathing room for a move higher.

Similarly, looking ahead to the Federal Reserve's December policy meeting next week, Gold is still realizing the benefit of the Federal Reserve scaling back its hawkish rhetoric. An environment where nominal interest rates aren’t rising as quickly as anticipated should, in theory, undercut gains by real yields; historically, falling real yields are bullish for Gold prices.

As such, traders should keep an eye on the US Treasury 10-year yield: down by -14-bps since their close on November 30, they have recovered +10-bps off their December low. Further gains threaten Gold's bullish breakout and bottoming effort. 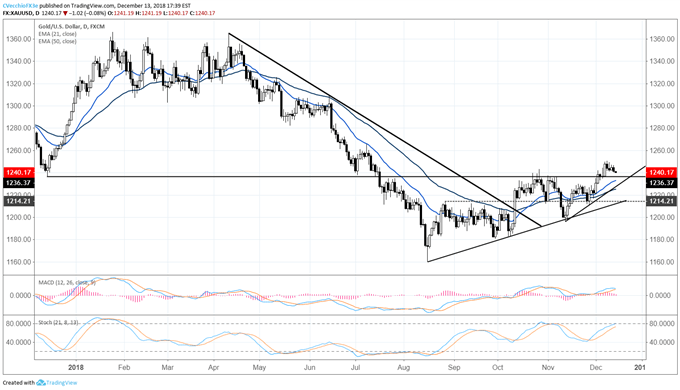 Having found itself able to retake the December 2017 swing low of 1236.37, Gold was able to post its first close above a level that it had last seen on July 17. Price continues to trade above the uptrend from the August, September, and October lows, while a new uptrend from the November 13 and 28 lows has been established as a guiding force higher. Now that both daily MACD and Slow Stochastics have turned higher, bullish momentum is gathering; this is confirmed by the separation building in the daily 8-, 13-, and 21-EMA envelope, as well as the difference between the daily 21- and 50-EMAs.

...but is Facing its First Real Test of Support Around the Corner

Nevertheless, the first real test of the breakout attempt may come into play back at the key 1236.37 level, where a confluence of support is forming: the rising trendline from the two November swing lows; the daily 21-EMA; and the former December 2017 low / July, October, and November 2018 swing highs. Failure down here would constitute a failed breakout and invalidate the bottoming effort in the near-term. 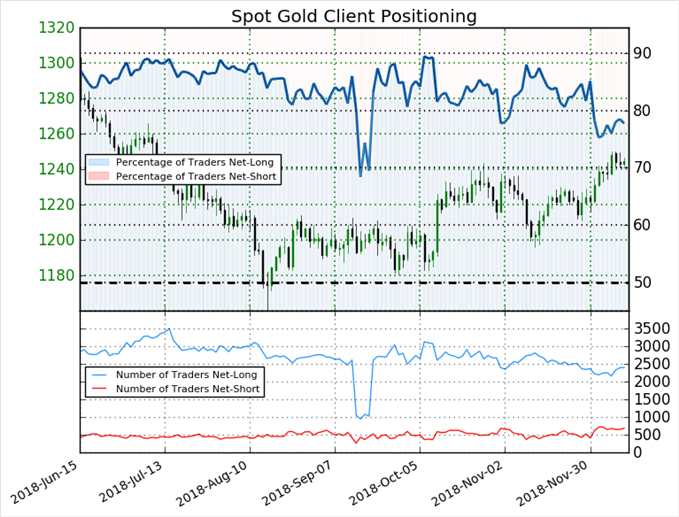 We typically take a contrarian view to crowd sentiment, and the fact traders are net-long suggests Gold prices may continue to fall. Traders are further net-long than yesterday and last week, and the combination of current sentiment and recent changes gives us a stronger Gold bearish contrarian trading bias.