DXY Index Holds Near Yearly Highs Ahead of UK No-Confidence Vote, US CPI

- The no-confidence vote against UK Prime Minister Theresa May will proceed, but it's no guarantee that she will be removed; expect two-way volatility in GBP-crosses to remain elevated.

- US inflation data for November will underscore the need for the Fed to shift back to data dependency and away from its preset policy course.

The US Dollar (via the DXY Index) is holding up near its weekly, monthly, and yearly highs as political tensions in Europe maintain their hold influence over the British Pound and the Euro. Ongoing negotiations between Brussels and Rome over the Italian budget, jolted by a new French fiscal problem, remain a focal point for FX markets. But it's difficult to suggest that anything matters more than Brexit at the moment.

The problem with replacing May as prime minister is simple: you need a warm body to replace her. The issue is, anyone who wants the job doesn't have the support to get it, and those that might be good for the job have no desire to retain it. It's very possible that May survives the vote, and UK parliament is then faced with either taking May's EU-UK Brexit deal ("soft Brexit"), taking no deal at all ("hard Brexit"), or turning it back to the 'people's vote' (second referendum).

The long and short of the Brexit story at present time: the British Pound is still trading erratically around news headlines, an environment, as a trader, I'd prefer to have nothing to do with. If you must trade GBP-crosses, good luck at the casino.

November US CPI Due Out Today

Upcoming inflation data for November will show that both measures of the US Consumer Price Index remain above the Federal Reserve’s medium-term target of +2%, even if the topline figure is trending in the wrong direction. Headline CPI is due in at +2.2% from +2.5%, and Core CPI is due in to hold at +2.2% (y/y). Due ahead of the December FOMC rate decision, these readings may have two key impacts: first, that expectations of a December rate hike are crystallized (currently at 68%); and second, that odds of further tightening in 2019 are diminished.

We’ve previously argued that the Fed is becoming more data dependent again, and the inflation report on Wednesday will only enhance expectations that an adjustment away from the preset policy course is coming next week. Join live coverage of the November US CPI report at 8:15 EST/13:15 GMT. 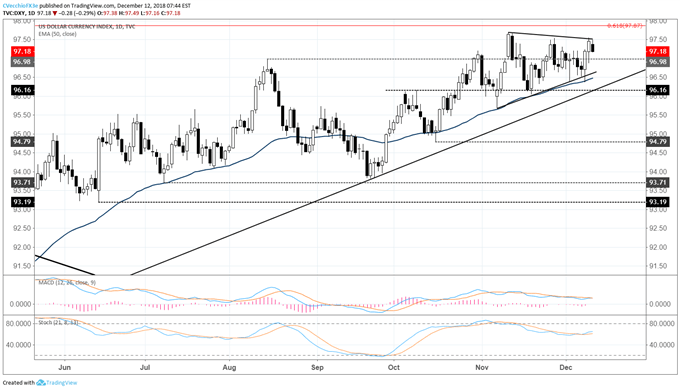 For now, the symmetrical triangle in place since the end of November remains the central focus. For bulls, the November 28 bearish outside engulfing bar at 97.54 would need to be cleared out in order to validate a bullish breakout. Conversely, given that the bullish outside engulfing bar's low from yesterday came in at the daily 50-EMA - a level of trend support tested and held on numerous occasions since first breaking above it on September 27 - validation for a bearish breakout would need to come in below 96.36. Further confidence in a breakdown would be instilled with a move below the November 20 low at 96.04.