DXY Index on the Edge Ahead of Quieter Trading Day

- The National Day of Mourning for the late US President George H.W. Bush means financial markets will be closed, economic data releases pushed until tomorrow, and Fed Chair Jerome Powell's testimony in front of the Senate Joint Economic Committee is canceled.

- With no developments likely on the US-China trade war front either, market movement will be severely limited during the second half of the trading day - particularly after European markets close, and there are lower odds of significant developments around Brexit or the Italian debt crisis.

The US Dollar (via the DXY Index) was able to stave off a crash through its uptrend from the September, October, and November lows yesterday thanks largely due to the largest decline in US equity markets since early-October. The role of 'safe haven' isn't new for the greenback, but despite yesterday's bounce, it appears the winds are turning against the US Dollar.

In Europe, both the Brexit negotiations and the Italian debt crisis appear to be moving in directions that would lead to rallies by the British Pound and the Euro in the near future. On a day like today, when US financial markets are closed for a National Day of Mourning for the late US President George H.W. Bush, any significant movement in FX will have to come from across the pond (if anything happens at all).

For the British Pound, traders are entertaining the idea of a potential 'no Brexit' outcome now that the European Court of Justice ruled that the UK government could revoke Article 50. Even if UK Prime Minister Theresa May sees her Brexit agreement voted down next Tuesday when parliament meets and votes, a floor seems to be building under the Sterling as sentiment among even Brexiteers is shifting to 'remain' over 'Brexit with a bad deal.'

For the Euro, one needs to look no further than the five-month low in Italian bond yields as a gauge for how the Italian budget deficit negotiations are going. As the European Commission weighs penalizing Italy with a excessive debt procedure (EDP) that would result in a 0.5% of GDP fine - roughly €9 billion - it appears that there's a growing appetite in both Brussels and Rome to come to an agreement before the end of the year. The symmetrical triangle in EUR/USD is worth watching; the technicals call for a resolution of the pattern by the third week of December.

Elsewhere, with the US in a National Day of Mourning, there are several changes to the calendar. All of the economic data due out today - in particular, the ADP Employment Change report and the ISM Services/Non-Manufacturing Composite, serving as precursors to the November US Nonfarm Payrolls report this Friday - will be pushed to tomorrow. The testimony by Fed Chair Jerome Powell in front of the Senate Joint Economic Committee has been postponed; no make-up date has been announced yet.

All in all, traders should be anticipating a quieter day of trading barring signifciant developments out of Europe regarding Brexit or the Italian debt crisis. To this end, it is unlikely that there will be any further developments in the US-China trade war during the day today. 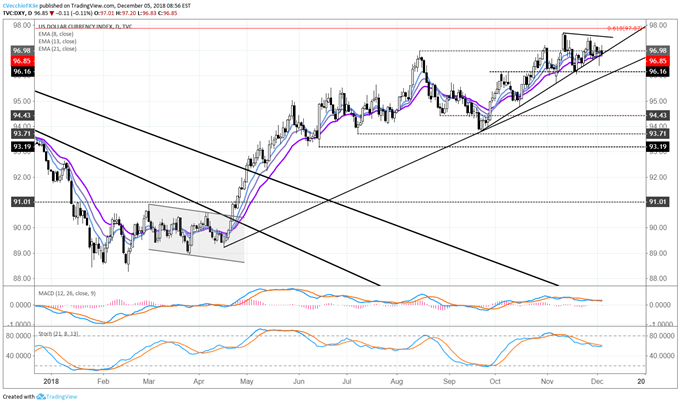 Benefiting from the dramatic plunge in risk appetite yesterday reviving its safe haven role, the DXY Index was able to stave off a breakdown through its uptrend from the September, October, and November swing lows. Otherwise, there is no change in the technical forecast from yesterday.

The break in the three-month trend is particularly important when viewed in the context of the failed run-up to fresh yearly highs; a truncated top often speaks to a turn developing. Both daily MACD and Slow Stochastics are gliding lower, albeit not quite yet in bearish territory. Even as price moves lower below its daily 8-, 13-, and 21-EMA envelope, we have yet to clear out the mid-November swing low at 96.04; failure below here could offer a confirmation signal for a top in the DXY Index.