- The initial bout of optimism regarding a potential ceasefire in the US-China trade war appears to already be fading, as market participants can't seem to nail down what real progress was made over the weekend.

- With the G20 summit out of the way, attention is returning back to domestic economic issues for the US Dollar, and in turn, the DXY Index is suffering as Fed rate pricing becomes a more prominent influence again.

The US Dollar (via the DXY Index) found little inspiration among the latest developments in the US-China trade war, losing ground yesterday and following up with more weak-kneed price action today. Given that influences from abroad are at a minimum - neither Brexit nor the Italian debt crisis are in the headlines in a signficant manner - it's worth considering why market participants are dragging the greenback lower.

For the last several days we've been arguing that the Federal Reserve's implied shifts in policy over the past several weeks (coming to a head with speeches by the Fed's Clarida and Powell last week, as well as the release of the November FOMC meeting minutes). The fact of the matter is that there is a clear, discernible chasm between what the Fed is telling they want to do and what the market thinks the Fed will do, and it's bad for the US Dollar.

To recap: the recent shift in tone by the Fed suggests that the preset policy course (one 25-bps rate hike per quarter) is being replaced by a return to data dependency. As is usually the case, any gap between Fed expectations and market pricing should close (as markets are data dependent by default), and this favors the Fed becoming less hawkish as soon as the December policy meeting. The Fed has had the tendency to promise action sooner than it has delivered, constantly setting up the US Dollar for disappointment as rate hikes materialized slower than anticipated.

The newly data-dependent US Dollar will be put through several tests this week, as the first week of a new month typically contains a bevy of 'high' rated data on the economic calendar. To wit, the November US ADP Employment Change report and the US ISM Services composite due out on Wednesday will serve as appetizers for the main course this Friday, the November US Nonfarm Payrolls report. It won't take much disappointment relative to expectations in order to keep the US Dollar heading lower. 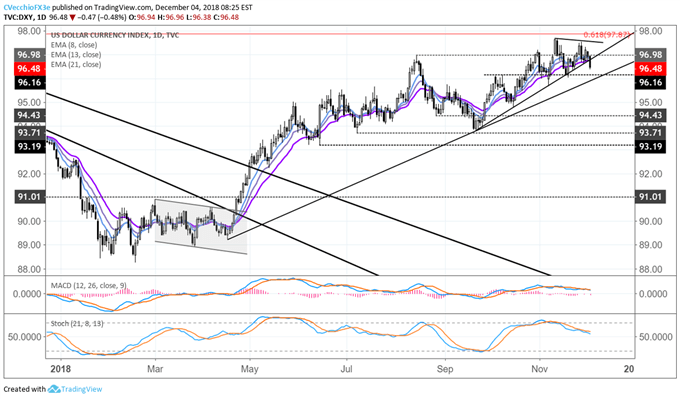 The melt-up conditions examined last week ultimately produced the turn lower we were looking for, and now the DXY Index is in the process of breaking its uptrend from the September, October, and November swing lows. The break in the three-month trend is particularly important when viewed in the context of the failed run-up to fresh yearly highs; a truncated top often speaks to a turn developing. Both daily MACD and Slow Stochastics are gliding lower, albeit not quite yet in bearish territory. Even as price moves lower below its daily 8-, 13-, and 21-EMA envelope, we have yet to clear out the mid-November swing low at 96.04; failure below here could offer a confirmation signal for a top in the DXY Index.