- Financial markets have been active in the second half of the week, thanks in part to a speech by Fed Chair Jerome Powell and the release of the November FOMC meeting minutes.

- All of the goodwill priced-in over the past 48-hours hinges on progress to relieve tensions in the US-China trade war at the G20 summit in Buenos Aires, Argentina.

- Retail traders have shifted into neutral positioning in EUR/USD and USD/JPY, leaving the US Dollar's forecast mixed heading into next week.

The US Dollar (via the DXY Index) has made very little progress this week, meandering higher on Monday and Tuesday only to be knocked lower on Wednesday and Thursday. But Friday has arrived, and with it, fresh attention on the US-China trade war as US President Donald Trump and Chinese President Xi Jingping ready to meet on the sidelines of the G20 summit in Buenos Aires, Argentina.

If the stakes weren't high already going into the meeting, Fed Chair Jerome Powell raised them with his speech on Wednesday. By signaling to market participants that the Federal Reserve was moving away from a preset policy course and back to one that is more data dependent, the Fed chair essentially removed the central bank as a potential culprit for any forthcoming volatiltiy in financial markets. Concerned about rising interest rates? The Fed chair is telling market participants not to worry; they won't be rising at the same rate any longer.

Accordingly, the onus, to a greater degree, is now on US President Trump to end the US-China trade war. Otherwise, whatever goodwill built into higher yielding currencies and risk-correlated assets this week will evaporate rather quickly (but you won't be able to blame the Fed).

Unfortunately for traders, the bulk of material, market-moving information will likely come out over the course of the weekend, while FX markets are closed. There are thus two ways to approach the current environment.

On one hand, if you're bent on keeping positions open over the weekend, you need to be mindful of the significant gap risk that exists; it would be a good idea to reduce leverage on positions. On the other hand, if you're apathetic towards current price action, just be patient; new charts and opportunities will present themselves on the other side of the weekend. 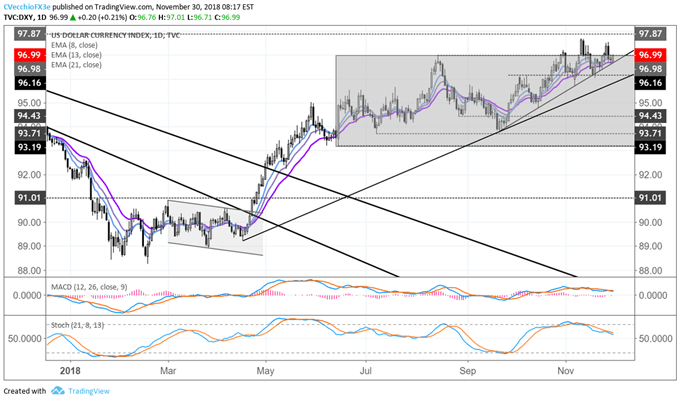 The sideways price action seen this week (two days of gains followed by two days of losses) has done little to alter the DXY Index's technical picture. Price remains above its daily 8-, 13-, and 21-EMA envelope, but both daily MACD and Slow Stochastics are not pointing higher. The 'melt up' situation towards the yearly high at 97.69 remains, although indicators are have diverged due to the lack of conviction in price action, leaving open the possibility of a turn lower. A loss of upside momentum would be noteworthy below 96.04, the mid-November swing low.