- The DXY Index continues to edge higher, but for the second day in a row gains have been capped by less than +0.1%.

- Signs that Brexit continues to go off the rails coupled with new drama in the Italian budget saga has the European currencies reeling on Tuesday.

The US Dollar (via the DXY Index) continues to edge higher at the start of a key week, although the main attractions have yet to pass. While the second half of the week will focus on the US economy with the November FOMC minutes and hope for a release of tensions in the US-China trade war, attention at the moment is focused around developments in Europe that are dragging down the British Pound and the Euro.

For the British Pound, Brexit remains front-and-center, and it's difficult to imagine the intensity of coverage being any greater than it is at present time. Reports seem to indicate that UK parliament will take up a vote on PM Theresa May's Brexit plan some time during the week of December 10.

But after US President Trump threw cold water on her plan, noting that it would make it difficult for a US-UK trade agreement post-Brexit, the British Pound has been hit hard. After all, one of the core promises of the Leave campaign was for a boom in trade post-Brexit; in reality, now, this couldn't be further from the truth.

For the Euro, the Italian budget saga hit a new twist today as the European Commission appears to be digging in its heels even more than previously. Even as the Italian government came back with a deficit of 2.2% (from 2.4%), the EC has signaled that it will move to penalize Italy under the "excessive deficit procedure" that could result in fines for the country. For European policymakers in Brussels, the concern remains that large deficits will raise the odds of a larger-scale Greece-style crisis (Italy’s debt-to-GDP ratio is 130%) for the Eurozone’s third-largest economy.

Otherwise, the US Dollar seems unfazed by other factors but for Brexit and the Italian budget saga, including domestic factors like the Federal Reserve. A speech by Fed Vice Chair Richard Clarida failed to inspire much movement in the greenback; another sign that market participants are beginning to doubt the Fed's hawkish intentions. With Fed Chair Jerome Powell's speech on Wednesday and the release of the November FOMC meeting minutes on Thursday, markets will see just how dovish the Fed is becoming in light of recent moves in energy markets and inflation data. 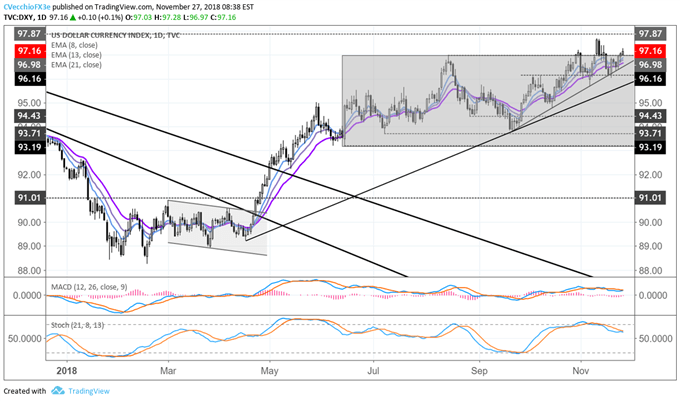 The technical picture hasn't changed, largely due to the uninspiring price action witnesses thus far at the start of the week. Price remains above its daily 8-, 13-, and 21-EMA envelope, but both daily MACD and Slow Stochastics are not pointing higher. The DXY Index appears to be in a 'melt up' situation, where indicators are beginning to diverge due to the lack of conviction in price action. A loss of upside momentum would be noteworthy below 96.04.

Read more: US Dollar Clings onto Gains at the Start of Key Week