- The Italian government will submit a new budget to the European Commission today, while UK Prime Minister Theresa May hinted that her cabinet could reach an agreement on Brexit within 48-hours.

The US Dollar (via the DXY Index) is taking a breather on Tuesday after hitting fresh 2018 highs at the start of the week. However, the reason for pause isn't due to any machinations around the US economy, Fed policy, or the US-China trade war; but rather, attention has turned to potentially positive developments in Europe that is boosting demand for both the British Pound and the Euro.

For the British Pound, there's nothing more important at present time than the Brexit negotiations; we've outlined as much in our forecast for the October UK CPI report as well as the British Pound weekly technical forecast. Whereas the tides were going out for a few days, they now appear to be coming back in: UK Prime Minister Theresa May has indicated that her cabinet will be meeting on Wednesday, November 14.

It's important to temper any enthusiasm about a potential Brexit resolution this week, even as the British Pound rallies. After the UK prime minister's cabinet agrees in principle, the deal still needs to be approved by the European Comission, the UK parliament, and other EU members' parliaments. It's still a long road until Brexit is officially resolved.

For the Euro, the Italian government will be resubmitting its budgetary proposal to the European Commission in Brussels today. However, no material changes in the budget are expected, which means more gridlock is ahead. For European policymakers in Brussels, the concern is that large deficits will raise the odds of a larger-scale Greece-style crisis (Italy’s debt-to-GDP ratio is 130%) for the Eurozone’s third-largest economy. A compromise isn’t out of the question, but is looking markedly less likely than where things stood at the end of September.

Looking ahead at the calendar, a relatively quiet North American trading session on Tuesday caters to traders preparing for events later this week. Of note, the Q3'18 Japanese GDP reading is due just before Asian markets open on Wednesday. See full expectations here. 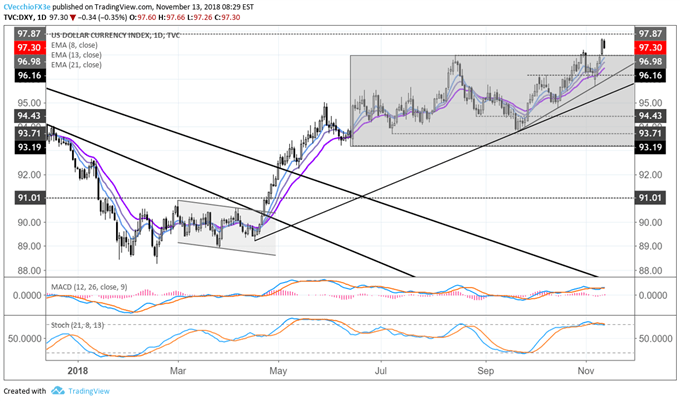 Following the breakout to fresh yearly highs yesterday, a simple pause in the rally is nothing to be concerned about for US Dollar bulls. It is worth monitoring, however the source of the pullback; if a Brexit deal emerges and an Italian budget is agreed upon, odds are high that the DXY Index will continue to pullback in the near-term. Otherwise, the technical outlook remains strong, with price above its daily 8-, 13, and 21-EMA envelope, and both daily MACD and Slow Stochastics continuing to hold in overbought territory.