US Dollar on the Cusp of Fresh Yearly Highs

- Speculation is starting to build that the ECB may need to change its policy course in a more dovish direction, not only because of Italy, but now because Eurozone growth broadly is starting to slowdown; the Euro is lower.

- Weakness in the British Pound is coming as UK PM Theresa May fends off calls for a general election, a sign that her time may be running out amid frustrating progress in the Brexit saga.

- Retail trader positioning remains bearish on the US Dollar, which still suggests further gains ahead.

The US Dollar (via the DXY Index) is pushing higher for the fourth time in five days and eighth in eleven overall as the build-up of negativity in Europe continues to weigh on the British Pound and the Euro. Even with the US-China trade war in focus overnight - USD/CNH touched 6.977, its lowest level in more than a decade - investors seem to care more about Brexit and the Italian debt saga at present time.

For the British Pound, weakness in the second half of the month has dragged the currency down to its lowest level versus the Japanese Yen since early-September and the US Dollar since mid-August. For GBP/USD in particular, the pair is less than 100-pips away from the yearly low.

Weakness in the British Pound is coming as UK PM Theresa May fends off calls for a general election, a sign that her time may be running out amid frustrating progress in the Brexit saga. It would appear that, regardless if she is able to secure a 'soft Brexit' for the UK, a no-confidence vote is coming up.

For the Euro, it feels like 'death by 1,000 cuts' at the moment: the Italian budget saga; contagion in the bond market; the ECB's dovish tilt at its October policy meeting; and now, signs that Eurozone growth is slowing unexpectedly. The Q3'18 Eurozone GDP report showcased the weakest performance since 2014, further raising the odds that the ECB will have to deviate from its preset policy course.

Overall, the US Dollar stands to benefit as concerns elsewhere are overshadowing any concerns with the US economy or the Fed's path of rate hikes. The economic calendar is light today, but with the October US ADP Employment Change report due tomorrow and the October US ISM Manufacturing Index due on Thursday, traders will soon have plenty of reason to look back to domestic influences - all leading into the October US Nonfarm Payrolls report this Friday. 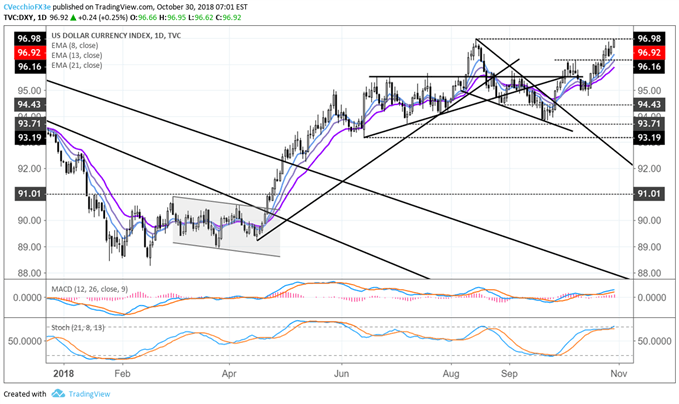 The bullish breakout potential noted last week has been realized, now that the DXY Index has broken through its early-October high and has moved to within 0.1% of the yearly high. For now, the outlook remains bullish for several reasons. Price is still above its daily 8- 13-, and 21-EMA envelope, and the moving averages in sequential fashion. Likewise, both daily MACD and Slow Stochastics are trending higher in bullish territory. A breakout through 96.98 to fresh yearly highs appears imminent. The daily 8-EMA should be eyed as trend support; price hasn't closed below the daily 8-EMA since October 16.