- The Japanese Yen is the top performer today as global equity markets have quickly moved back to or through their early-October lows, a sign that risk appetite is receding once again.

- Progress made around Brexit - UK PM Mays says the deal is "95% done" - helping keep the British Pound afloat while concerns over Italy's budget and the US-China trade war are hampering other major currencies.

- Retail trader positioning is bearish on the US Dollar, which bodes well for price action in the coming days.

The US Dollar (via the DXY Index) has advanced to but has been thus far unable to break through its early-October high, even as global risk appetite takes a hit once again. Unlike the selloff in stocks earlier in the month, this time US Treasury bond yields are moving lower, a combination that has favored the Japanese Yen (which entered the week on strong footing).

With respect to the concerns influencing price action on Tuesday, there's no new story to tell: Brexit continues to dominate trading in the British Pound; the Italian budget saga is dictating movement in the Euro, even as the European Central Bank meeting approaches this Thursday; and perception of the US-China trade war is driving bond, currencies, and stocks all across Asian markets.

While there haven't been any significant developments to report, that in and of itself may be seen as problematic: considerable time has passed without any readily available solutions having presented themselves. It seems like market participants are getting to the precipice of throwing in the towel.

All in all, an environment in which stocks are weak, bonds are strong (yields down), and the US Dollar is lower, both Gold and the Japanese Yen stand to outperform. With respect to Gold prices, it's worth noting that 1236.37 is being tested today, the December 2017 low that has been resistance ever since the breakdown in mid-July. That's as significant a flashing red light that market conditions have changed as one could hope for at this juncture. 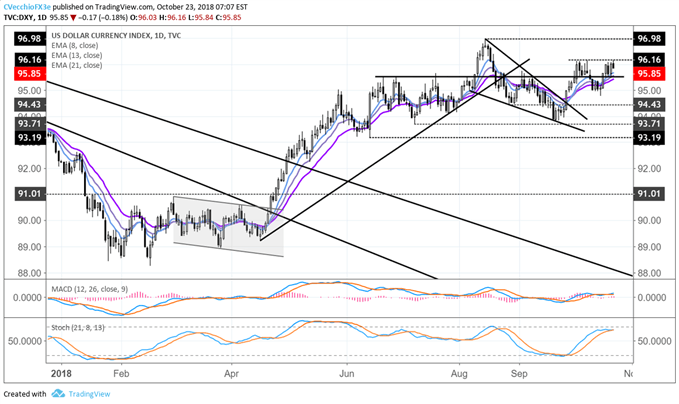 Despite the DXY Index advance being checked by the early-October high near 96.16, the improved technical posture still points higher into the second half of this week. Price remains above its daily 8- 13-, and 21-EMA envelope, and the moving averages are still in sequential fashion. Both daily MACD and Slow Stochastics are trending higher in bullish territory. Such price action suggests that today may be merely a pause before a bullish breakout opportunity ahead.

Read more: FX Week Ahead: BOC on Wednesday, ECB on Thursday, Q4’18 US GDP on Friday