- The British Pound remains on weak footing after the EU-UK summit this week failed to produce enough significant progress on Brexit.

- The Canadian Dollar hit a six-week low after the September CPI report missed expectations significantly, in at +2.2% versus +2.7% expected (y/y).

- Retail trader positioning is turning bearish on the US Dollar, and sentiment is turning 'bullish' as a result.

The US Dollar (via the DXY Index) has seen a revival after two days of strong gains on Wednesday and Thursday, and now the world's reserve currency is set to close out the week near its highs for the month. A return back to the black fits with the historical performance in October - over the past 10 years, October has been the third best month of the year for the greenback.

It seems likely that the US Dollar is benefiting from concerns over Brexit and Italy more than anything going on domestically; the top billed US event or data release of the week was the September FOMC minutes, which barely produced a reaction at all in the DXY Index on Wednesday. Housing data due out later this morning could be a thorn in the side for the greenback, as recent figures have been declining (not necessarily a surprise in an environment with rising mortgage rates).

With respect to concerns across the pond, the Brexit and Italian issues will push on into another week. A lack of significant progress during the EU-UK summit has traders fearing a 'hard Brexit' outcome once again, and rumors are swirling about a no-confidence vote for UK Prime Minister Theresa May. Rome and Brussels are digging in over the Italian budget, pushing Italian BTP yields to fresh multi-year highs. 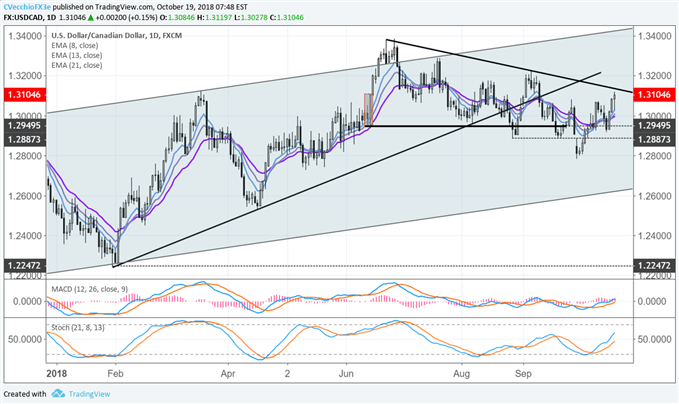 The big mover on the morning is the Canadian Dollar, down to six-week lows after the release of the September CPI report. Canadian inflation figures came in much weaker than anticipated for last month, registering +2.2% versus +2.7% expected (y/y) on the headline.

Moreover, the September Canadian Retail Sales print came in far below expectations as well, contracting in fact. Curiously, October Bank of Canada meeting rate hike odds are up from 78% to 92% today after the data, which leads to the conclusion that the hike is very much priced-in.

In turn, USD/CAD may have some fuel left in the tank to run higher as it's now difficult to foresee the BOC increasing its hawkish rhetoric after the September inflation and retail sales reports. The absence of forward guidance could undercut the Canadian Dollar; USD/CAD may soon be challenging the descending trendline from the highs in June and September near 1.3125. 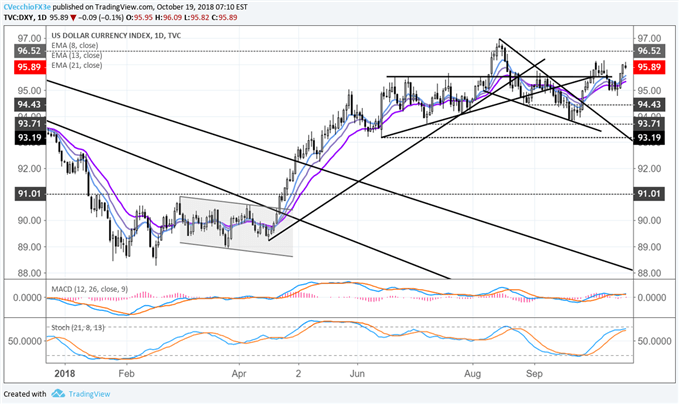 The DXY Index's technical posture has improved greatly over the past few days, pointing higher into next week. Price is back above its daily 8- 13-, and 21-EMA envelope, and the moving averages are likewise back in sequential fashion. Both daily MACD and Slow Stochastics have turned higher, remaining in bullish territory. Universal agreement among the indicators suggests the outlook for the US Dollar is bullish.