- Bloomberg News reported that the UK was dropping its demand over the Irish border in an attempt to smooth the path towards a ‘soft Brexit’ deal.

- The British Pound rallied across the board on the news, but gains were tempered as a November summit has yet to be scheduled to finalize any agreement.

The British Pound has found relief at the end of a trying week, rallying sharply in the past hour amid a news report provided hope for a Brexit breakthrough in the coming days. Bloomberg News reported that the UK government was prepared to drop its Irish border demands as a way to help ease the path towards securing an agreement with the European Union.GBP/USD rose across the board on the news, rallying from 1.3045 to as high as 1.3104 in the minutes after. At the time this report was written, GBP/USD had eased back to 1.3064.

The EU had previously contended that the UK government’s stance towards the Irish border was one of the examples of “cherry picking” which aspects of EU membership they wanted to keep after leaving the bloc. While the shift in stance may ultimately dissuade some Tory party members from supporting UK Prime Minister Theresa May’s plans, it will also likely help win over others and some Labour “Remainers,” who could help get the final agreement passed in parliament early in 2019.

The development was a ray of sunshine through on otherwise cloudy weekfor the British Pound, given the lacking results of the EU-UK summit that ended on Thursday. The shift in stance likewise represents a stark turnaround from yesterday, when it appeared UK PM May was dissatisfied with the EU’s insistince to drop the Irish border demands.

To this end, if a breakthrough has indeed occurred, the rationale German Chancellor Angela Merkel provided for not wanting a November EU-UK summit – no breakthrough on the Irish border – then we should expect her to publicly announce her new source of satisfaction, and signal willingness for another enclave next month. There may yet be another bullish catalyst on the horizon for GBP-crosses should a November EU-UK summit announcement be made in the future. 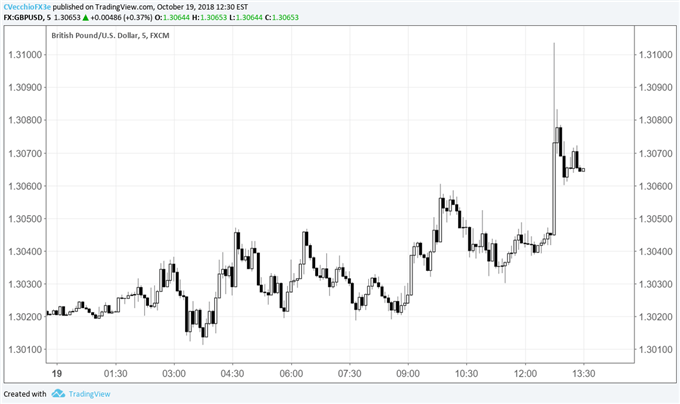