- Capital flight out of US financial markets seems to be the common theme on the day, with the US Dollar falling alongside US Treasuries and all three major US stock indices.

- Concerns are cropping up about the rise of interest rates, which could choke off growth in all corners of the globe.

The US Dollar (via the DXY Index) has seen of all its daily gains erased ahead of the US cash equity open today, thanks to an ongoing rebound in risk appetite on the back of positive news out of Europe. With the Italian government appearing to have secured a budget deal, the Euro has been able to turn higher as Italian BTP yields have dropped.

The news out of Italy is clearly overshadowing whatever other news about the Eurozone developing today; look no further than the lack of reaction to the October ZEW Surveys. The sentiment readings for the Eurozone and Germany came in at or fresh lows of the year, in the case of the former, the worst reading since early-2012.

Nevertheless, despite some signs that economic data momentum continues to erode for the Eurozone - the Citi Economic Surprise Index entered the week at -24.8 after starting the quarter at +3.6 - the Euro has proved resilient. The fact of the matter is that any reduction in the perceived risk that Italy could move down a path towards exiting the bloc, especially in an environment where populism and protectionism are gaining traction, will overshadow much of anything else coming across the news wire. The Euro's ability to ride this catalyst higher will depend soley on how far Italian BTP yields can pull back.

In the same vein - data being overshadowed by larger thematic influences - the British Pound has failed to capitalize on earlier wage growth figures which, were these normal market conditions, would easily stir speculation over a near-term rate hike by the Bank of England. But no BOE rate hike odds have moved today thanks to the looming specter of Brexit; indeed, over the next few days, untl the issue of Brexit is resolved, nothing else will practically matter for Pound sterling. 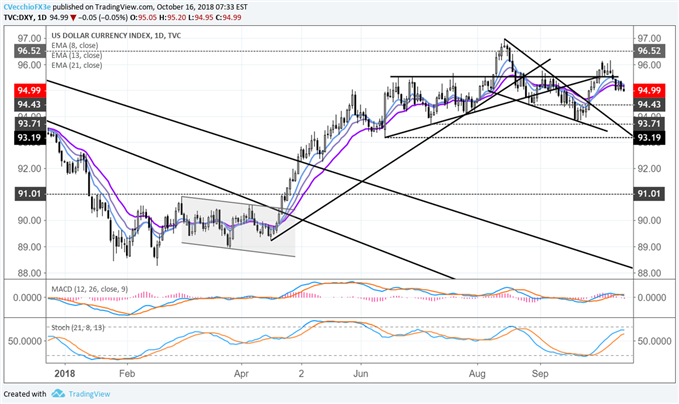 Even as the US Dollar has slipped out of the spotlight, none of the developments have been meaningful enough to change the tone of the technical picture. Price is back below its daily 8- 13-, and 21-EMA envelope, while daily MACD is now compressing at the signal line. Given that the DXY Index closed last week below 95.53, a neutral outlook is warranted for the foreseeable future, with bearish momentum gathering steam.