- The reopening of the US bond market following yesterday's holiday has seen fresh highs for US Treasury yields across the board.

- Another push higher by Italian BTP yields has dragged EUR/USD below 1.1450.

- Retail traders continue to look to sell the US Dollar, which bodes well for its near-term outlook.

The US Dollar (via the DXY Index) has set a fresh monthly high this morning, clearing out the previous October high set last Thursday while moving up to its highest level since August 20 in the process. Over the past three weeks (starting with September 21), the DXY Index has only managed three closes in the red; needless to say, the current uptrend remains strong.

As we've previously discussed, the push higher by the US Dollar has little to do with changing perception around Fed policy. True, US Treasury yields are going up at the moment, with the 10-year yield hitting its highest level since April 2011, which in turn is helping push out yield spreads versus other currencies (US-UK and US-German 2- and 10-year spreads have moved and continue to move favorably in the US Dollar's direction). But a look at Fed funds futures shows that rate expectations are actually down since the September FOMC meeting.

The crucial observation here may be that higher yields are no longer going hand-in-hand with higher stock prices, an environment that has characterized financial markets ever since the Fed began raising rates in December 2015. Now the US S&P 500, working on its fifth consecutive day of losses, threatens to move below its former all-time high set in January 2018 near 2872.70, which also coincides with the uptrend from the May, June, and August lows.

So while we saw higher US Treasury yields translate directly into a stronger US Dollar across the board back in September, we've now witnessed safe haven currencies begin to gain ground versus the buck - even as yields have continued to climb. Losses by USD/JPY in recent days, particularly in context of higher US bond rates, should be viewed as a warning sign for risk appetite. 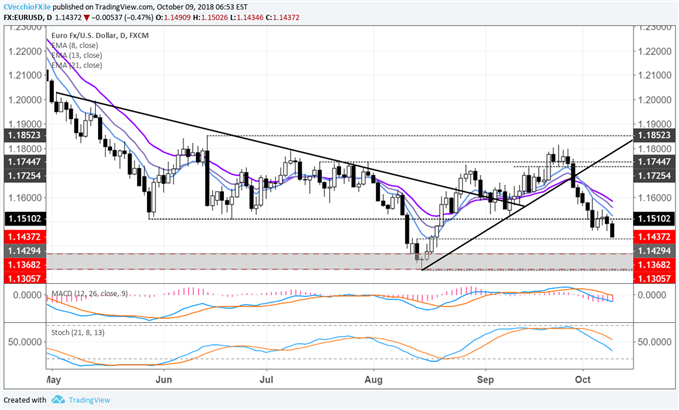 The negative backdrop for EUR/USD is being fueled by none other than the deepening woes around the Italian budget standoff between Rome and Brussels. Italian Economy and Finance Minister Giovanni Tria pointed out that low growth doesn’t allow for a cut to debt-to-GDP, saying that "the outlook is not positive." The Italian BTP 10-year yield has now moved up to its highest level since February 2014, while the Italian FTSE MIB index is on the cusp of bear market territory, down almost -20% since its early-May high.

Overall, given that EUR/USD is 57.6% of the DXY Index, ongoing weakness in the pair means an increased likelihood of more US Dollar gains in the near-term. Price action in EUR/USD remains very weak, with price holding below its daily 8-, 13-, and 21-EMA envelope; it's worth noting that the slopes of the moving averages are becoming steeper to the downside, suggesting that bearish momentum is accelerating. With both daily MACD and Slow Stochastics trending lower in bearish territory, EUR/USD remains a sell for the time being. 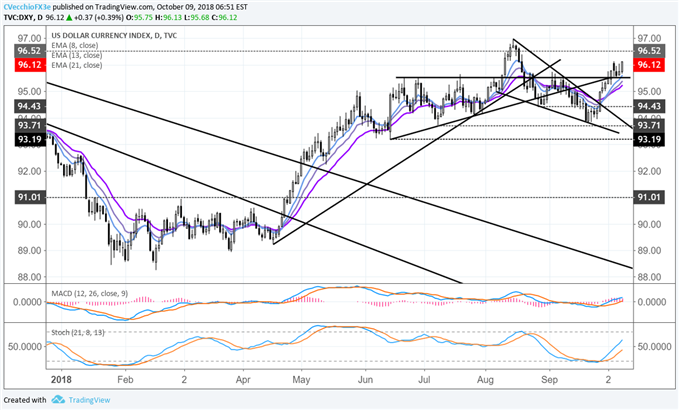 Given the near-term EUR/USD outlook, it's of little surprise that the DXY Index continues to retain a bullish outlook. The DXY Index has maintained levitation above 95.53, the level we've outlined as the Maginot line between neutral and bullish outlooks. Now, with price still above its daily 8-, 13-, and 21-EMA envelope and the moving averages in sequential order, bullish momentum remains strong. Both daily MACD and Slow Stochastics are continuing to trend higher above their respective median or neutral lines. For now, amidst a quieter economic calendar, the DXY Index uptrend remains valid.