- The DXY Index has traded back to its highest level since September 10, in the process breaking the downtrend from the August high.

- Pressure on the Euro has emerged again as the Italian government has forged ahead with a budget proposal that does not meet the European Commission's goals.

- Retail traders have been quick to jettison their long US Dollar positions during the reversal.

The US Dollar (via the DXY Index) is in the midst of its third straight day of gains, breaking its recent downtrend in the process. Starting with the Federal Reserve signaling its intention to plow forward with at least 100-bps of rate hikes between now and the end of 2019, the greenback's run since Wednesday has carried the DXY Index to its highest level since September 10.

But the Fed hasn't been the sole catalyst, nevermind the most important one, for the reversal seen by the US Dollar this week; instead, that honor goes to the Italian government.

For weeks, the rumor mill has churned over the state of affairs for the populist Italian government. Despite indicating otherwise, it now appears that Italian Prime Minister Giuseppe Conte's government will ignore the budgetary goals set forth by the European Commission.

While the European Commission typically suggests keeping deficit spending under 3% of GDP, officials have requested that the Italian government take on a skinnier budget in order to help alleviate the country's debt burden (around 1.6% of GDP). So, while the deficit target of 2.4% of GDP from 2019-2021, it seems inevitable that a clash between Brussels and Rome is a fait accompli. 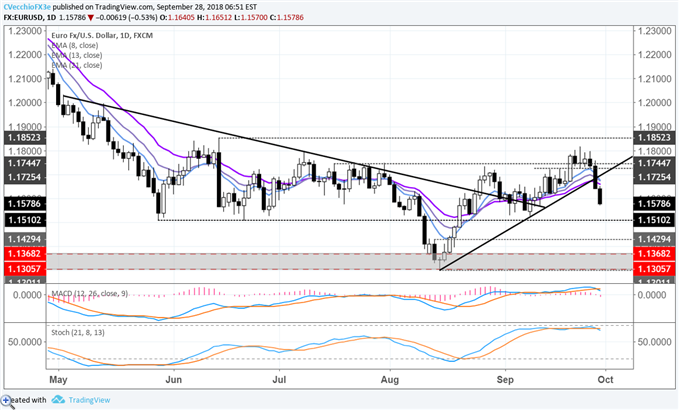 The resurgent weakness seen in Italian bonds, resulting from the Italian government's brazen disregard of European Commission budgetary guidelines, has spilled over to impact the Euro in a significant manner. Earlier this week, EUR/USD was trading near its highest level since June 14; now, it finds itself having erased nearly all of the gains since September 11. The break of the uptrend from the August lows in EUR/USD increases the odds of a return back towards key support around 1.1510 over the next week. 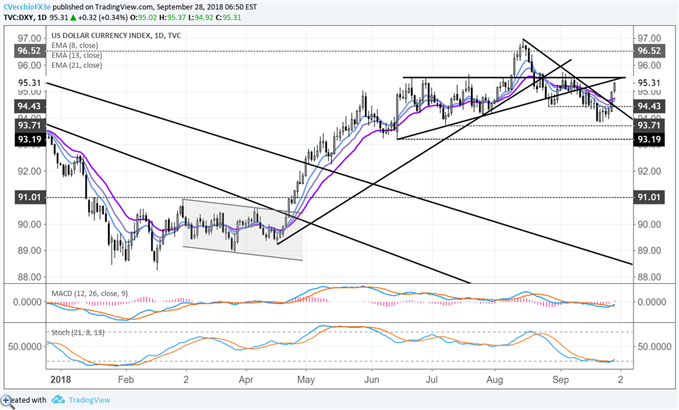 Unsurprisingly, weakness in the Euro is translating into a technical resurgence for the DXY Index. In the process, the bearish structure that was guiding price action for much of September has been negated in the process. Price is now back above its daily 8-, 13-, and 21-EMA envelope, even if the moving averages aren't in sequential order just yet. While both daily MACD and Slow Stochastics remain in bearish territory, the oscillators have started to trend higher.

As such, given that the DXY Index looks set to close the week above 94.43 - a level which constituted a reversal through both the daily 8- and 13-EMAs, the late-August swing low, and the descending trendline off of the August and September highs - a neutral outlook is appropriate in the near-term. A move back above 95.50 would in turn give cause for an upgraded assessment in October.