Preview for September FOMC Meeting and Outlook for US Dollar

- The DXY Index has had a quiet week thus far as traders have been awaiting the results of the September FOMC meeting.

- Even with a rate hike and a new Summary of Economic Projections or a press conference for Fed Chair Powell, policy expectations should remain firmly anchored to where they currently stand.

The US Dollar (via the DXY Index) has been moving sideways this week in the absence of any meaningful economic data. In the run up to the results of the Federal Reserve's September 25-26 FOMC meeting, traders have seemingly forgotten about Brexit, emerging market contagion, and the US-China trade war - at least temporarily.

As has been the case when front month odds are at 100%, the direction of the US Dollar today is not contingent on the Fed raising rates but rather what expectations are set for the path of rate hikes down the line. The perception of the pace of future tightening matters more than the actual tightening effort itself.

Beyond today's 25-bps rate hike, which is all but guaranteed, rates markets are pricing in a 78% chance of another hike in December (to bring the cumulative total to four 25-bps hikes this year) and a 75% chance of the first hike in 2019 coming in June.

Accordingly, the biggest source of volatility for the US Dollar will come from the updated Summary of Economic projections. With the unemployment rate below 4% and headline US infllation just off of its highest rate in the post-Global Financial Crisis era, it's possible that Fed Chair Jerome Powell speaks in tones that provoke traders to drag forward expectations of hikes in 2019 (i.e. odds of the first 2019 hike coming in March instead of June).

But considering that, back in July in front of Congress, Fed Chair Powell said that the pace of gradual rate hikes remains the best path "for now," there is a growing sense that the Fed will ultimately decelerate its hike schedule in 2019, down from its current pace of one 25-bps hike per quarter. 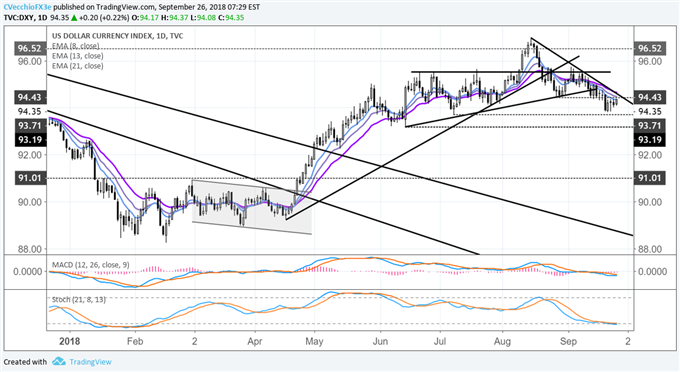 If a rate hike today is already priced in, and traders are already correct in thinking that a December hike will materialize as well, then there may not be much for the US Dollar to hang its hat on. As such, the already bearish technical structure that's emerged in recent days remains the motivating trend for the US Dollar.

Despite today's pre-FOMC rebound, the DXY Index has continued to hold below the late-August swing low near 94.43; today would be the fifth consecutive close below. Price remains below its daily 8-, 13-, and 21-EMA envelope, while both daily MACD and Slow Stochastics continue to trend lower in bearish territory. The outlook for the US Dollar will remain bearish over the coming days until 94.43 is retaken by the end of this week, which would constitute a reversal through both the daily 8- and 13-EMAs, the late-August swing low, and the descending trendline off of the August and September highs. Otherwise, the DXY remains favored to the downside.