- Market participants shrug off latest Trump tariffs after China vows to avoid devaluing the Yuan in the trade war, a sign that resolution may still be possible.

- A push higher by US Treasury yields is helping keep the US Dollar afloat, as it lingers near key support for a fifth straight day.

- Retail trader sentiment towards the US Dollar remains 'neutral,' but is on the precipice of shift to 'bearish.'

The US Dollar (via the DXY Index) continues to fight off attempts to push it lower, with yesterday's doji bar forming at critical support over the past three-plus weeks. Now, price is testing the late-August swing lows for the fifth consecutive day, a sign that market participants are not quite ready to choose a direction for the consolidating greenback.

Despite escalations in the US-China trade war, markets continue to brush off any long-term implications of real economic consequences. Even as the tit-for-tat attitude towards one another continued, the fact that China has vowed not to devalue the Chinese Yuan as a weapon leaves open the possibility that a resolution could still be eyed down the road.

Of course, it would be counterproductive for China to publicly declare a Yuan devaluation policy - it would certainly draw the ire of other economies like the EU or Japan - so any efforts made on the Yuan's behalf are likely to be stealth. To wit: a recent round of FX reserves figures showed that the People's Bank of China was allowing the Yuan to weaken by not selling off its reserves. Color this analyst skeptical that the US-China trade war is close to being resolved; it will continue to esclate before what seems to be an inevitable 'crashing back to earth' moment for market participants.

Elsewhere, the US economic calendar is quiet the rest of the session following this morning's housing data. Less than a week out from the Federal Reserve's September FOMC meeting, markets are still pricing in >95% chance of a 25-bps rate hike next week and are now pricing in at least an 80% chance of a hike in December. The September FOMC meeting may shape up to be a 'buy the rumor, sell the news' type of event for the US Dollar as near-term Fed policy tightening is already priced-in. 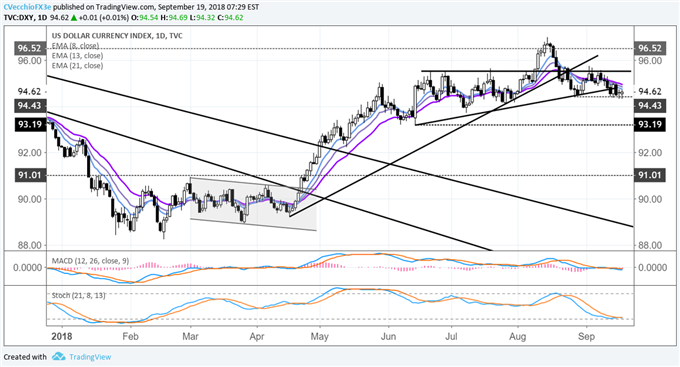 Not much has changed for the US Dollar in recent days. The DXY Index remains on the precipice of breaking significant near-term support. Price is comfortably below its daily 8-, 13-, and 21-EMA envelope, while both daily MACD and Slow Stochastics have turned lower in bearish territory. A daily close below the late-August swing lows around 94.43 would trigger a downgrade in the US Dollar's near-term outlook from 'neutral' to 'bearish.'