- The US-China trade war took another step forward yesterday, but with the latest round of Trump tariffs clocking in at 10% as opposed to 25% as expected, risk appetite has been only impacted marginally.

- The US Dollar should see losses accelerate upon a DXY Index close below the August low at 94.43.

- Retail trader positioning is becoming more outright bearish towards the US Dollar.

The US Dollar (via the DXY Index) has continued its September struggle, working on its sixth down day over the past seven; of the 12 trading days thus far this month, the DXY Index is down in nine of them. We can immediately rule out greenback weakness as a result of speculation around the Federal Reseve, given that next week's meeting still sees >95% chancce of a 25-bps rate hike, according to Fed fund futures.

Instead, with an otherwise quiet economic calendar in the rearview mirror as well as down the road ahead, movement in the US Dollar over the past 24-hours has been largely tied to shifting perceptions around the US-China trade war.

The latest round of Trump tariffs will see an additional $200 billion of Chinese imports levied with an additional duty of 10%. However, the baseline expectation for market participants was for the tariffs to clock in at 25%; so, in a sense, the 'bark was worse than the bite.'

Market participants have proven relieved with the news, as it represents another instance in which the speculation around the trade war has proven far worse than the actual resulting impact (historically, there's good reason to be concerned). To this end, risk appetite is evolving in a manner that's supportive of more weakness in the Japanese Yen - a convenient dove-tailing of fundamentals and technicals.

Overall, not much has changed for the US Dollar over the past several days, regardless of the news flow. Price action remains weak, and the supporting evidence for our August call that the US Dollar was topping out remains as relevant as ever. With the US economy growing at over +4% annualized, markets pricing in Fed rate hikes in September 2018, December 2018, and June 2019, and the US-China trade war having a limited impact on growth thus far, this may be as good as it gets for the US Dollar in the near-term. 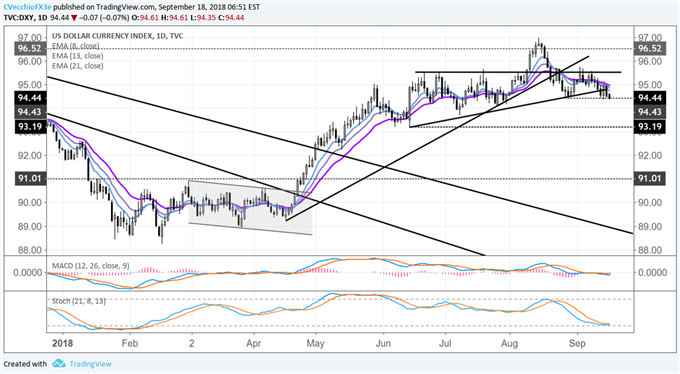 The technical outlook for the DXY Index has not changed in recent days. The US Dollar remains on the precipice of breaking significant near-term support. Price is still below its daily 8-, 13-, and 21-EMA envelope, while both daily MACD and Slow Stochastics have turned lower in bearish territory. A move below the late-August swing lows near 94.43 would warrant a downgrade in the US Dollar's near-term outlook from 'neutral' to 'bearish.'