- Reports that the ECB will downgrade its economic forecasts tomorrow has dragged down EUR/USD today.

- Nothing new is expected from the BOE tomrrow as investors await a potential Brexit deal culminating in the next weeks, paving the way to an EU-UK summit in November.

The US Dollar (via the DXY Index) has been treading water the past few days, essentially biding time since the start of September: the DXY Index closed at 95.10 on August 31, and at 95.10 is where it opened up today. While traders continue to discuss intense headlines regarding the US-China trade war or emerging market contagion, the fact of the matter is that these issues have made for better headlines than actual market moving events in recent days.

As such, attention in the short-term is quickly shifting to the two central bank decisions tomorrow morning from the Bank of England and the European Central Bank (the latter of which I'll be covering live). While neither central bank is expected to unveil any new policies, the details at the margin will dictate whether or not tomorrow yields greater volatility among EUR- and GBP-crosses.

For the BOE, a policy meeting that doesn't produce a new Quarterly Inflation Report reduces the likelihood of a significant move altogether. But the policy decision comes against the backdrop of purported progress on the Brexit front, where several times just this week we've heard that a deal could materialize in the coming weeks.

We fully expect the BOE to show deference to the Brexit process, opting to say and do little before an EU-UK Brexit plan is agreed upon. But against an improving risk backdrop regarding the likelihood of a hard Brexit, traders will be likely hunting for clues to see how quickly the next BOE rate hike will arrive in 2019; it is not likely that the BOE signals another 25-bps hike when it releases its next QIR in November.

For the ECB, the stakes have been raised for tomorrow's meeting after Bloomberg News reported that the Governing Council is ready to downgrade its economic assessment. The reasons? Concerns over US-led trade wars, Brexit, and contagion from emerging markets, according to the report.

The entire EUR-complex has been knocked lower as a result, with speculation arising that this could be the first step taken in preparation for a change in the current preset policy course (ending QE in December 2018, raising rates by the end of "summer 2019."). See our full Euro forecast for the ECB meeting here. 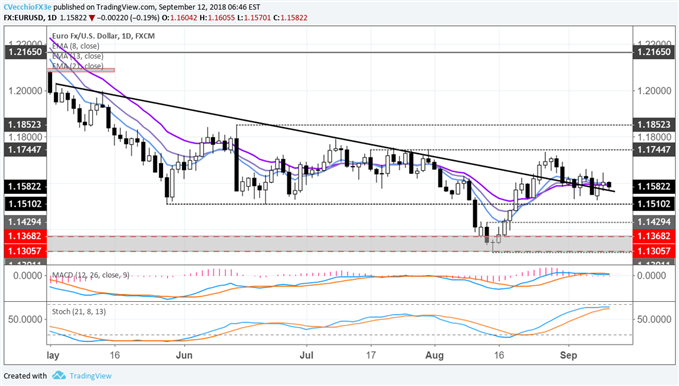 It stands to reason then that EUR/USD will be more active than GBP/USD tomorrow. But EUR/USD's chart is in no-man's land territory right now, with no viable strategy or pattern clearly discernible: in the middle of a potential range (if you squint), this isn't an ideal time for range traders; similarly, it's not a good time for breakout traders; and with price flat among its daily 8-, 13-, and 21-EMA envelope, it's not the time for momentum traders either. EUR/USD needs to clear 1.1510 to the downside or 1.1745 to the upside before a directional bias is appropriate once again. 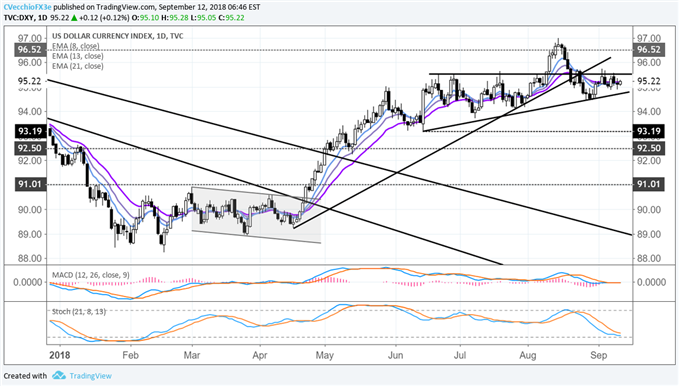 It's of little surprise then that the DXY Index is facing similarly grinding conditions, given that the Euro is 57.6% of the DXY, The technical picture remains murky as price continues to flirt with a break below its daily 8-, 13-, and 21-EMA envelope. Momentum indicators are flat, with daily MACD hovering at the signal line and Slow Stochastics steadying themselves just below the median reading. Accordingly, the near-term technical outlook for the US Dollar remains 'neutral.'