- The British Pound has rallied sharply this morning after the EU's chief Brexit negotiator Michel Barnier said it would be "possible" to get a Brexit deal within eight weeks.

- Japanese Yen and US Dollar pressured as signs of progress towards a soft Brexit have lifted risk appetite; however, US-China trade war concerns still loom large.

The US Dollar (via the DXY Index) has erased all of its gains after the August US Nonfarm Payrolls report on Friday as market participants jettisoned safe haven currencies on the back of positive news regarding the state of Brexit negotiations on Monday. The European Union's chief Brexit negotiator Michel Barnier said it would be "possible" to get a Brexit deal wrapped up by early-November, sparking rallies in both EUR/USD and GBP/USD.

The knock-on effect of two of the largest components of the DXY Index rallying has been unsurprisingly a weaker US Dollar against all but two of the major currencies - the other safe havens, the Japanese Yen and the Swiss Franc. USD/JPY's advance speaks to the improved environment for risk appetite in the FX space, even if other asset classes (i.e. stocks) aren't acting as enthusiastic about the developments.

It stands to reason, then, that news of the Brexit progress isn't emanating out of FX markets in a particularly meaningful way is due to the more convincing influence of other themes, mainly, US-led trade wars. China and the United States are on the verge of another round of tit-for-tat tariffs, while Canada and the United States still haven't found enough common ground to resolve tensions over NAFTA. It seems likely that there will be a disconnect between asset classes moving forward (i.e. EUR/USD and GBP/USD will move more independent of stocks, particularly when Brexit developments occur). 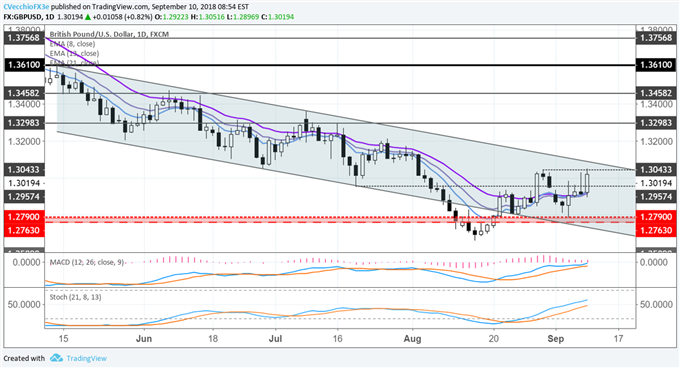 The rally sparked by the news today has seen GBP/USD retake all of its inverted hammer candle from Friday, clearing out the highs seen in late-August in the process. Even if a close is achieved through the August 30 swing high at 1.3043, descending channel resistance dating back to mid-May comes into focus almost immediately at 1.3070. But trading is both a function of price and time, so if we find GBP/USD trading through 1.3043 by the end of September, it would mean that the downtrend has been broken and a bottom has been established. 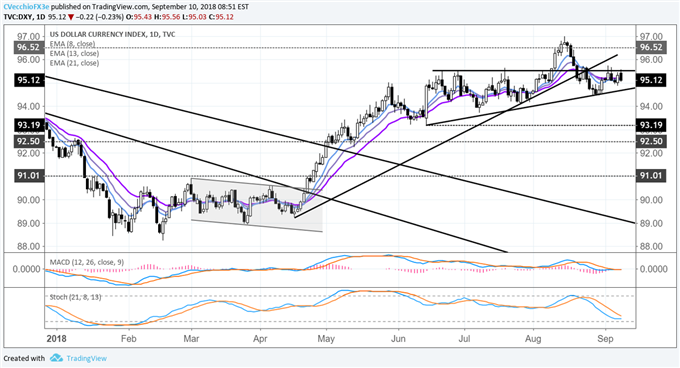 Circling back to the US Dollar, weakness today has erased any progress made on Friday. Despite the bullish outside engulfing bar established last session, the technical picture is murky now that price is flirting with a break below its daily 8-, 13-, and 21-EMA envelope. On the indicator front, daily MACD is flat at the signal line and Slow Stochastics have continued to steady themselves just below the median reading. Accordingly, the near-term technical outlook for the US Dollar remains 'neutral' at the moment.