- Emerging market currencies remain under a significant amount of presure, with both the Argentinian Peso and the Turkish Lira extending their losing streaks.

- Talks between Canada and the US over the NAFTA negotiations are ongoing but making little progress; meanwhile, US President Trump may be close to announcing the implementation of $200 billion of tariffs on Chinese goods.

The US Dollar (via the DXY Index) is starting off September on positive footing, rising to its highest level since August 24 in the process. Even as the calendar has flipped into the final month of the quarter, many of the old concerns that have influenced price action remains as the key drivers: trade wars emanating from the United States; contagion among emerging market economies; and geopolitical tensions surrounding Syria.

With respect to trade wars, the start of September already has two significant developments to watch for. In terms of the NAFTA negotiations, it's been reported that Canada and the US are making little progress, and that US President Trump is likely to move forward in presenting Congress with the Mexico-only version of the trade deal. 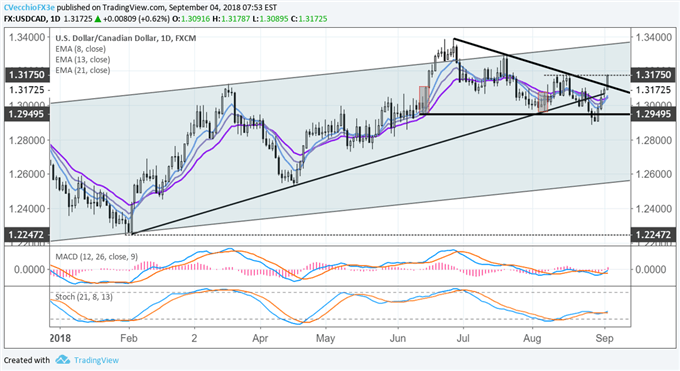 The goodwill that we saw built into the Canadian Dollar in the first few weeks of August was all but eliminated at the end of the month, and USD/CAD is now positioned in a manner to suggest the move below 1.2950 was a false breakdown attempt. As such, the recent pullback from the yearly highs may be viewed as a consolidation period before a continuation effort; a move through the late-August swing highs near 1.3175 would be revealing.

Elsewhere on the trade war front, it appears that US President Trump is on the verge of implementing another $200 billion in tariffs on Chinese goods later this week. USD/CNH is trading back higher through 6.85 again, but the fireworks for global market participants would really begin if USD/CNH eclipsed 7.00.

Meanwhile, the beginning of September is also seeing the continuation of contagion spread through emerging market economies. The Turkish Lira meltdown at the start of August dragged all emerging market economies with high external debt-to-GDP ratios, high inflation, and large current account deficits (as a percentage of GDP) into the firing line, and the ramifications are still being felt by EM currencies like the Argentinian Peso and the South African Rand today.

In an environment where much of the external debt held by emerging market economies is denominated in currencies whose central banks are raising rates, we're facing down a ticking time bomb in terms of economic pain in emerging markets. This crisis will fester and linger; it's very unlikely issues hurting EMs getting better before getting much, much worse. 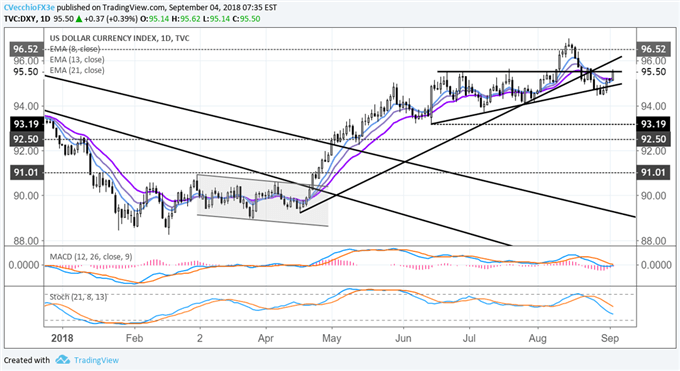 All of the factors have precipated a positive environment for the US Dollar, particularly as equity markets around the world pull back in. In the near-term for the DXY Index, price is now back above its daily 8-, 13-, and 21-EMA envelope, while both daily MACD and Slow Stochastics have started to retrace their recent turns lower.

While a 'neutral' bias is applicable at the moment, further price development through prior key resistance at 95.53 would speak to an improved outlook for the US Dollar at the start of September.