- Contagion continues to spread through emerging markets, with the Indian Rupee hitting a record low versus the US Dollar, and the Indonesian Rupiah falling to its lowest level since the 1997 Asian financial crisis.

- The Canadian Dollar dropped ahead of the open of equity trading in North America after Canadian Minister of Foreign Affairs Chrystia Freeland said that a NAFTA deal may not be concluded by today.

- The US-China trade war is back at the forefront after US President Trump threatened to slap another $200 billion of tariffs on Chinese goods.

The US Dollar (via the DXY Index) is gaining for the second day in a row (and its first two-day rally since August 14-15) as risk appetite continues to erode across the globe. Higher yielding currencies, particularly those in emerging markets, have been hit hard, as it appears that concerns from Argentina and Turkey have jumped elsewhere: the Indian Rupee hit a record low versus the US Dollar, and the Indonesian Rupiah fell to its lowest level since the 1997 Asian financial crisis.

Price action in the EM FX space at the end of August has revealed two important takeaways to bring into September. First, the mid-month calm that we saw was misleading; volatility is here to stay. To wit, as of this week, 30-day realized vol in USD/CNH eclipsed that in EUR/USD for the first time ever.

Second, the longer these emerging market currencies stay weak, the greater the likelihood of crises developing through the end of 2018. At the current exchange rates (particularly for USD/ARS and USD/TRY), it's only a matter of time before defaults occur and financial insitutions start eating losses - fully expect focus to remain on emerging markets throughout September.

Elsewhere, adding more fuel to the fire, trade tensions emanating from the United States are back in focus. With respect to China, US President Trump said that he wants to move forward with another $200 billion of tariffs in Chinese goods. Similarly, USD/CAD got a boost earlier after Canadian Minister of Foreign Affairs Chrystia Freeland said that a NAFTA deal may not be concluded by today.

We've previously suggested that by reaching a deal with the EU, and now that a deal with Mexico has materialized, US President Trump will dig in his heels versus China; concentrating the trade war on one front, as opposed to multiple fronts, increases the odds that the US-China trade war continues on for a longer period of time than previously expected. Even if a deal with Canada isn't finished today, it should be in the near future. 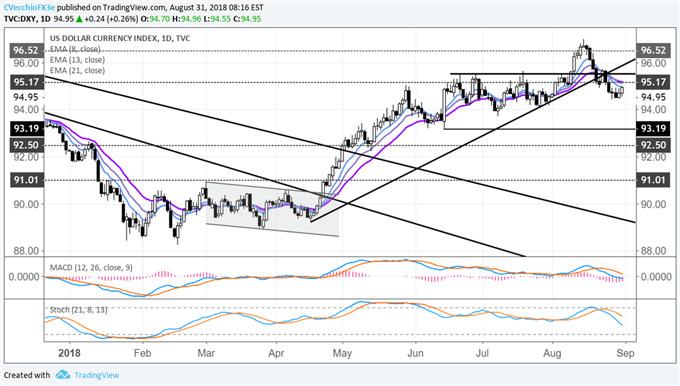 In the near-term for the DXY Index, price remains below its daily 8-, 13-, and 21-EMA envelope, while both daily MACD and Slow Stochastics continue to trend lower (with the former close to issuing a sell signal). Further losses should be anticipated until the July 26 bullish outside engulfing bar low is reached near 94.08; the short-term outlook continues to be to sell US Dollar rallies. The bearish bias would be invalidated given a close through the daily 21-EMA at 95.20.