- The daily 13-EMA, which had been resistance since mid-June, has survived tests as support yesterday and today, suggesting Gold may have indeed turned the corner.

- Retail traders remain net-long Gold, but sentiment has started to shift in a manner that reinforces a near-term bullish outlook.

With the US Dollar in the midst of its worst stretch of the year - having lost ground in nine of the last 10 sessions, today included - Gold prices have been able to post a meaningful rebound from their yearly lows. As discussed last week, the US Dollar is the single most important factor driving Gold at the moment - neither the US-China trade war nor the Turkish Lira implosion have had nowhere close to the same impact in recent weeks and months.

While Gold's long-term charts haven't changed that much over the past week (see last week's update for multi-month views), there has been an important development in recent days that is worth calling attention to. As previously observed, Gold had been holding below its daily 13-EMA for over two months, last posting a close above said moving average on June 14. 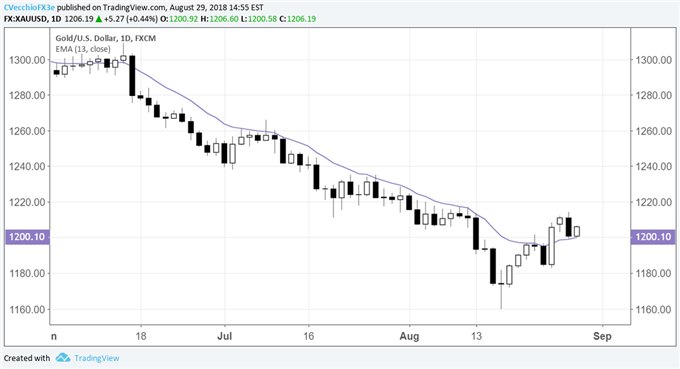 The quick transition of the daily 13-EMA from resistance to support calls attention to a possible change in trend. In line with our outlook from last week, the break above the daily 13-EMA shifts Gold's near-term outlook from 'bearish' to 'neutral.' It still holds that the only scenario in which a legitimate bullish bias (beyond a near-term scalping opportunity) would materialize would be if price were to overtake 1236.37, the December 2017 swing low that quickly morphed into resistance once broken on July 17. 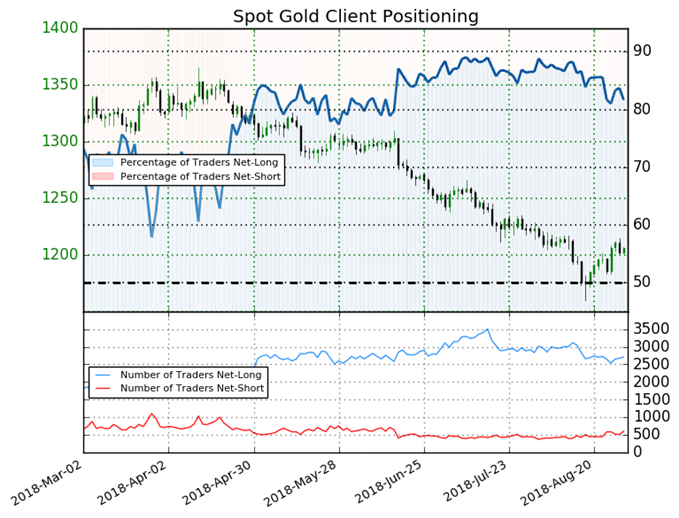 Recent changes in sentiment - traders are less net-long than yesterday and compared with last week - warn that the current Gold price trend may soon reverse higher despite the fact traders remain net-long. We'll be looking to see if the daily 13-EMA can maintain its new role as support during any attempted reversal higher.