- The US Dollar is in the midst of its worst stretch since the end of March, pacing for its fourth consecutive day of losses.

- Undering the greenback has been commentary from US President Trump, who suggested that Fed interest rate policy was too tight.

- Retail traders remain net-long GBP/USD, but have flipped to net-short EUR/USD overall; the outlook for the US Dollar is mixed.

The US Dollar (via the DXY Index) is on pace for its fourth day of losses after US President Donald Trump poignantly criticized the Federal Reserve for its efforts to tighten monetary policy, while at the same time suggesting that both China and the EU are taking efforts to devalue the Yuan and the Euro, respectively.

While it isn't typical for sitting presidents to criticize Fed policy, this wouldn't be the first time that US President Trump hasn't opined on monetary policy. Of course, this seemingly puts the Fed in a bind, whereby if they don't raise rates in September as markets are pricing in - currently a 92% chance, per Fed funds futures - then they will be seen as having sacrificed their independence.

But the commentary from US President Trump in the Reuters interview comes at a pivotal time for the US Dollar, which is facing down the August FOMC meeting minutes tomorrow and the Jackson Hole Economic Policy Symposium on Friday and Saturday. If anything, concerns over US-instigated trade wars with China and the EU were already likely to be top topics this week; the comments revealed today will only intensify the spotlight on the potential currency and trade wars unfolding.

For now, with the US Dollar pulling back thanks to the US president, higher yielding currencies and risk correlated assets are performing well this morning. In an environment in which there has been a clear grab for US Dollars - a knock-on effect of the turmoil in emerging markets - a weak US Dollar is seen as a positive development for risk assets. In effect, the greenback is acting like the quintessential safe haven currency: rallying when stocks fall, falling when stocks rally. 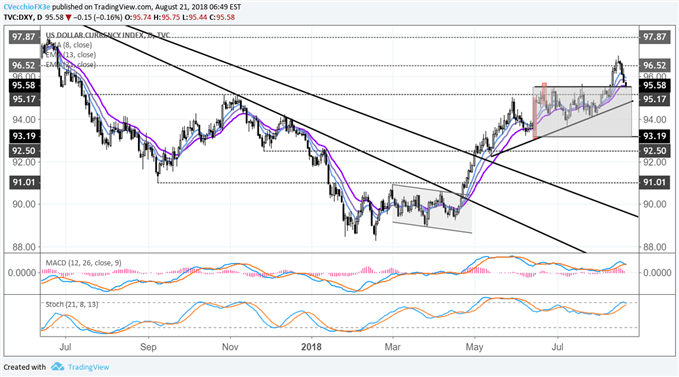 As price action has unfolded in recent days, it's become increasingly clear that a false breakout scenario is being threatened by the DXY Index (largely due to the 'inorganic' nature of the dollar's rally). The daily 8- and 13-EMAs, which the DXY Index had closed above everyday in August, were both lost yesterday. Althought still in positive territory, daily MACD has issued a sell signal; Slow Stochastics are quickly losing momentum.

A false breakout scenario would be underway should the DXY Index close back below 95.53, the June 21 bearish daily key reversal and June 27 to 29 evening doji star candle cluster highs. In turn, if the largest component of the DXY Index, EUR/USD (at 57.6%), sustains a move back above 1.1510, then there is ample reason to believe that the recent US Dollar rally is finished.