- USD/TRY has extended its retracement, but not because of improving conditions between the US and Turkey, but rather because the Turkish government is making it harder for foreigners to short the Lira.

- A weak earnings report by a major Chinese financial institution has done more to move emerging markets today than anything out of Turkey.

- Retail traders are continuing to buy EUR/USD and GBP/USD, leaving us with a bullish outlook for the US Dollar.

The US Dollar (via the DXY Index) has rallied to a fresh yearly high this morning as risk appetite remains depressed following the events out of Turkey in recent days. USD/TRY's pullback today may be misleading, insofar as the catalyst, the government's decision to limit the total amount of foreign currency and lira swap and swap-like transactions to no more than 25% of banks’ legal shareholder equity, is essentially a measure designed to make it harder for foreigners to short the Lira.

As was the case yesterday, as far as the news goes, nothing material has changed over the past 24-hours that would lead us to believe that the situation is de-escalating at this point in time. The same holds true today: a Turkish judge denied the American pastor's appeal for freedom, and Turkish President Recep Erdogan announced a fresh wave of tariffs against the US.

It's important to put the USD/TRY reversal into context: it won't do much to change the long-term calculus that the sharp depreciation in the Turkish Lira poses. Put simply, It's just a matter of time before loan defaults occur and financial insitutions start eating losses (barring a very quick recovery by the Lira). 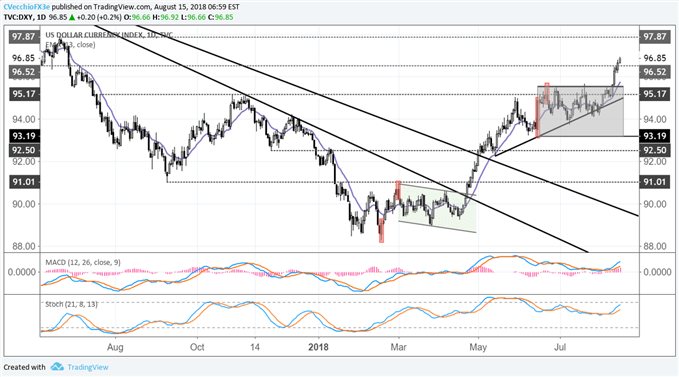 Otherwise, the catalyst for the dour mood among market participants today should be traced back to developments out of China rather than Turkey (although Turkey is essentially borrowing China's playbook for preventing more undesired currency weakness from setting in).

Tencent, China's largest tech company, posted underwhelming results in its quarterly report; carrying eight-times the weight of all Turkish stocks, it can be fingered as the culprit behind the sharp selloff in the MSCI Emerging Markets Index. The US-China trade war, which had been an afterthought for much of the past week, is making a bid to capture attention again now that USD/CNH has pushed to its highest level since May 2017.

At present time, the US Dollar remains well-positioned to take advantage of the turmoil impacting other currencies: the British Pound is contending with a Brexit process seemingly going off the rails; the Chinese Yuan is being used as a policy tool to fight back against the Trump tariffs; and the Euro is weighing concerns over a new financial crunch onset by the sharp fall in the Turkish Lira.

The technical profile for the DXY Index remains very bullish, with price holding above the key breakout point of 95.53, while at the same time staying above its daily 8-, 13-, and 21-EMA envelope. With MACD and Slow Stochastics continuing to point higher in bullish territory, the preferred outlook is to continue to buy dips in the US Dollar.