- Concerns over European banks' exposure to Turkey has hit EUR/USD hard, lifting the DXY Index to fresh yearly highs and its highest level in a year.

- Retail traders are have faded both EUR/USD and GBP/USD losses, keeping the IG Client Sentiment Index at a bullish outlook for the US Dollar.

Fears of Turkish Contagion Weigh on the Euro

The US Dollar (via the DXY Index) is trading in at fresh yearly highs on the day, finally breaking out to the topside of a two-month long consolidation effort that left price in an ascending triangle. The efforts made by the greenback to push to its highest level in a year are not rooted in positive developments on the US Dollar's side, but rather new concerns quickly emerging for the Euro.

According to a report by the Financial Times, the European Central Bank's supervisory arm, the Single Supervisory Mechanism, has been taking a close look at European banks' lending activities in Turkey. Given the sharp depreciation seen in the Turkish Lira in recent months, ECB regulators are beginning to express concern that Turkish borrowers are improperly hedged against Lira weakness, and may begin to default on their foreign currency loans.

Per the BIS, Turkish borrowers owe Spanish banks $83.3 billion, French banks $38.4 billion, and Italian banks $17 billion. While these exposures are small in the grand scheme of things, there is a sense of contagion that is making its way through the market on Friday.

But even a 'small crisis' could impact the ECB's best laid plans to normalize rates over the next year, forcing it back into a stance of providing liquidity to markets for longer than currently expected. The knock-on effect has been a higher demand for dollar-denominated assets as a result; both the US Dollar and US Treasuries are trading higher this morning. 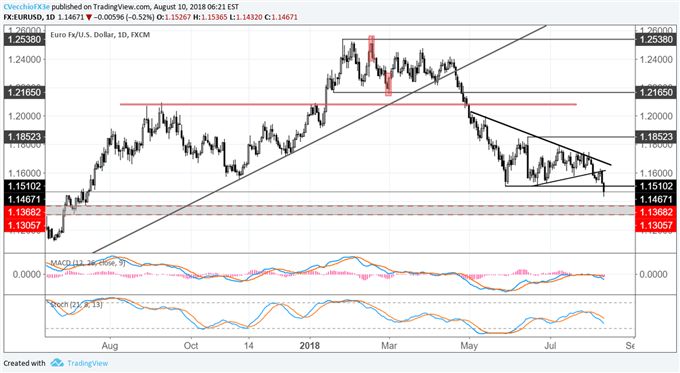 EUR/USD's decline today carried it through 1.1510, key support going back to the end of May, highlighted by the June 21 bullish key reversal. But bearish momentum has accelerated in recent days, with price comfortably below its daily 8-, 13-, and 21-EMA envelope, and both MACD and Slow Stochastics issuing sell signals. The descending triangle's continuation effort is fully underway, with the next key level of support coming in near the early-July 2017 swing lows at 1.1370.

Keep an Eye on July US CPI Later 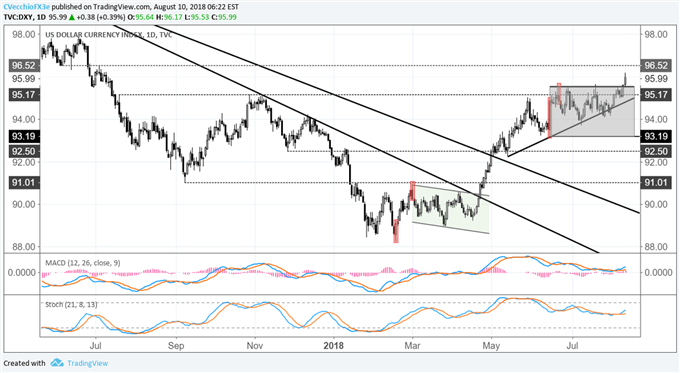 The US Dollar's (via DXY Index) bullish technical posture is proving forceful today, with a breakout finally taking place. A breakout resulting from the bullish ascending triangle remains valid given a weeky close through the June 21 bearish daily key reversal and June 27 to 29 evening doji star candle cluster highs at 95.53.