- The only 'high' rated release on the economic calendar is due out tomorrow, and there is still room in Fed funds futures to price in a September rate hike.

- A legitimate topside breakout for the DXY Index hinges largely on whether or not a weekly close can be achieved through 95.53.

- Retail traders are have faded both EUR/USD and GBP/USD losses, leading the IG Client Sentiment Index to a bullis outlook for the US Dollar.

The US Dollar (via the DXY Index) has made very little progress this week, not entirely unsurprising given the relatively quiet economic calendar. But the end of the week may see a change in trading conditions as the only 'high' rated event on the economic calendar is due out, when the July US Consumer Price Index is released on Friday.

While the first full week of August has thus produced numerous important developments, including more tariffs in the US-China trade war, signs that China is letting the Yuan devaluation go unchecked, and the Reserve Bank of New Zealand crushing speculation of a rate hike before 2020, neither a single nor a series of developments has led to any significant movement in rate hike expectations for the Federal Reserve's September policy meeting. 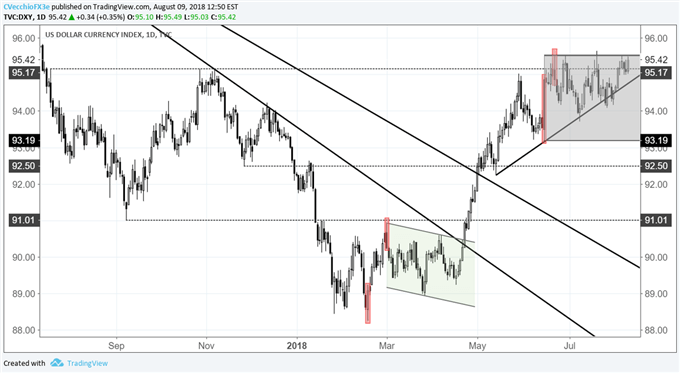 Technically speaking, the US Dollar's (via DXY Index) posture has continued to improve now that price is again above its daily 8-, 13-, and 21-EMAs. Both daily MACD and Slow Stochastics have confirmed 'buy' signals in bullish territory after price developments through the first three days of the week.

A breakout resulting from the bullish ascending triangle forming would only be valid given a move through the June 21 bearish daily key reversal and June 27 to 29 evening doji star candle cluster highs at 95.53 - the key level to watch for through the end of this week. Concurrently, we'll want to see the largest component of the DXY Index, EUR/USD (at 57.6%), break below 1.1510.

Read more: Euro Forecast: Euro Will Need to Look Beyond the Calendar to Stop its Skid