- Amid a quieter economic calendar, price action in FX markets has been constrained through the first two days of the week: EUR/USD has traded in less than a 100-pip range so far.

- Volatility in EUR/USD is likely to increase with US President Trump meeting with EC President Juncker in Washington, D.C. today as trade tensions are thrust into the spotlight.

- Retail traders have become more bullish on the US Dollar, which bodes ill for the greenback's near-term outlook.

EU-US Trade War in Focus as Juncker and Trump Meet

The US Dollar (via the DXY Index) is falling modestly as we turn through the middle of the week, price action thus far having proven uninspired in the presence of a barren economic calendar on Monday and Tuesday. But the lack of volatility, typical for trading during the summer, may soon be replaced by quick, aggressive moves as attention turns to the news wire.

After sparring from over 6,000 miles apart, US President Donald Trump and European Commission President Jean-Claude Juncker are convening in Washington, D.C. to try and head off an EU-US front in the budding global trade war. US President Trump has recently described the EU as a "foe" and EC President Juncker himself as a "killer," so the discussion between the two men shouldn't be lacking drama, to say the least.

Accordingly, given EC President Juncker's stated goal of trying to "de-dramatise" the situation, it seems that expectations should be set very low for any concrete measures to be agreed upon once the meeting concludes. The press conference on EU-US relations, set for 16 EDT/20 GMT, should drive two-way volatility, but not necessarily direction, in both the DXY Index and EUR/USD. 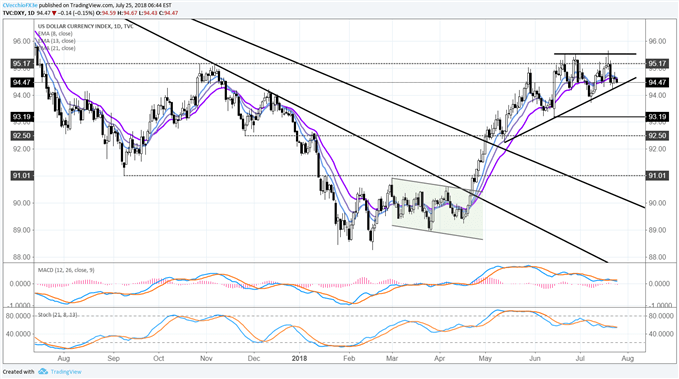 As such, there seems little chance that the DXY Index's recent consolidation in the ascending triangle give way in either direction. For now, until a close above 95.53 (the June 21 bearish key reversal and the June 27 to 29 evening doji star candle cluster highs) or below 93.19 (the June 14 bullish outside engulfing bar low) is achieved, it's best to wait for a clearly defined break in price.

Euro in Spotlight for Next 24-hours with ECB Tomorrow

Elsewhere, keeping our attention on the Euro, the European Central Bank meetings tomorrow in what will be the top-billed central bank event of the week. Ttraders may want to start lowering expectations here as well.

The primary reason to expect little to result from this meeting is the fact that the July meeting is one without new Staff Economic Projections; like the Federal Reserve (with its Summary of Economic Projections) or the Bank of England (with its Quarterly Inflation Report), the ECB has a multi-year track record of only making significant policy shifts at meetings when it has new economic forecasts in hand.

Moreover, and less of a generalization about ECB policymaking habits, at the previous meeting in June, the Governing Council effectively preset policy on a course through next June when President Draghi announced the schedule for winding down QE through the end of 2018 and pledged to wait on rate normalization until “summer 2019.”

With trade tensions running high and whiffs of a currency war in the air, it seems highly unlikely that Draghi will comment with the intent to move the Euro exchange rate. 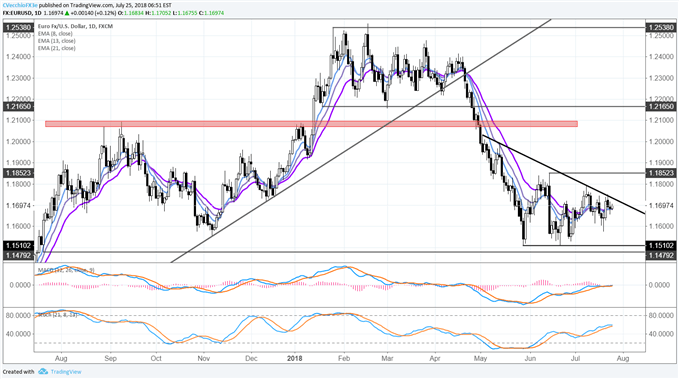 Much like the DXY Index of which it constitutes 57.6%, EUR/USD has consolidated into a descending triangle over the past two months. As such, there is a similar outlook on the market: stay away until key support and resistance that have defined the consolidation give way.That means bulls should stay sidelined until 1.1852 (the June 14 bearish outside engulfing bar) breaks and bears should wait until 1.1510 (the late-May and mid-June swing lows) gives way.

Read more: What Can We Learn from The History of Trade Wars?