- The US Dollar remains weaker after US President Trump said that rate hikes and a strong currency were bad for the US economy.

- A third failure in at 95.53 suggests that the DXY Index breakout isn't ready to commence yet - if at all.

- Retail traders are neutral but tilting more bearish on the US Dollar; more clarity is needed before a directional signal is given.

The US Dollar (via the DXY Index) has had a tumultuous 24-hours thanks to interference from central bankers and fiscal authorities alike. With the People's Bank of China seemingly embracing depreciation off the Yuan as a method to deal with the imposition of American tariffs, attention has been on FX markets for signals for other asset classes.

The clearest signal came perhaps yesterday when US stocks and Gold rallied while the US Dollar fell following commentary by US President Trump. Noting that the Chinese Yuan was "dropping like a rock," it appeared that the US president was wading from the trade war to a currency war.

Today, US President Trump is doubling down on his commentary. Earlier he tweeted, "China, the European Union and others have been manipulating their currencies and interest rates lower, while the U.S. is raising rates while the dollars gets stronger and stronger with each passing day - taking away our big competitive edge."

With these things said, there is now clear fiscal interference into matters of monetary policy in the US, which bodes poorly for the US Dollar. The timing of the latest commentary couldn't have come at a more crucial time for the greenback, with price having just charged higher (and failing) near its highest levels in a year. 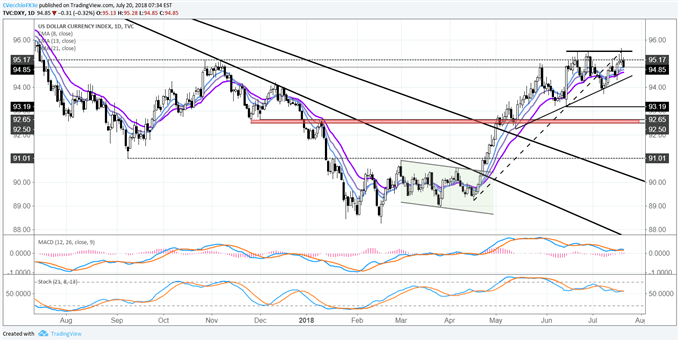 The DXY Index remains within the the ascending triangle that's been forming over the past eight weeks, which has suggested that a continuation effort to the topside is gathering pace.

But the US Dollar's (via DXY Index) technical posture is under pressure, with price threatening to slip back below its daily 8-, 13-, and 21-EMA envelope. Concurrently, both daily MACD and Slow Stochastics are nearing 'sell' signasl in bullish territory, a sign of momentum failing to develop to the topside..

As such, a breakout resulting from the bullish ascending triangle is on hold. We still believe that a breakout would only be valid given a close through the June 21 bearish daily key reversal and June 27 to 29 evening doji star candle cluster highs at 95.53 - the key we failed at once again yesterday.