- Fed Chair Jerome Powell sounded hawkish yesterday and is likely to again at the House Financial Services Committee later on this morning.

- The DXY Index is less than a quarter of a percent from its yearly highs established in mid- to late-June around 95.53.

- Retail traders are starting to become more bearish on the US Dollar, which bodes well for its near-term outlook.

The US Dollar (via the DXY Index) reached fresh yearly highs today as traders continue to bid prices higher following Federal Reserve Chair Jerome Powell's two days of testimony on Capitol Hill. With the Fed on the path of gradual rate hikes, markets are now pricing in 25-bps tightening efforts in both September (90%) and December (64%) this year.

But the most notable development over the past few days is not related to the Federal Reserve, but a different central bank: the People's Bank of China. The offshore USD/CNH rate hit a new yearly high itself today, its high exchange rate since July 12, 2017, amid a fresh wave of stimulus by the PBOC.

By using its medium-term loan facility (MLF) to help provide liquidity to banks, the PBOC is essentially rolling out its own quantitative easing program. In effect, the policy loosening effort serves another purpose: it weakens the Chinese Yuan.

While the China-US trade war appears to be morphing into a war of attrition, with both sides racking up casualties and without a clear end goal in sight for the tensions. But by allowing USD/CNH to appreciate rapidly, the PBOC is sending a clear signal to market participants that it intends to use its currency as a tool to buffer the economy from the negative impact of tariffs. 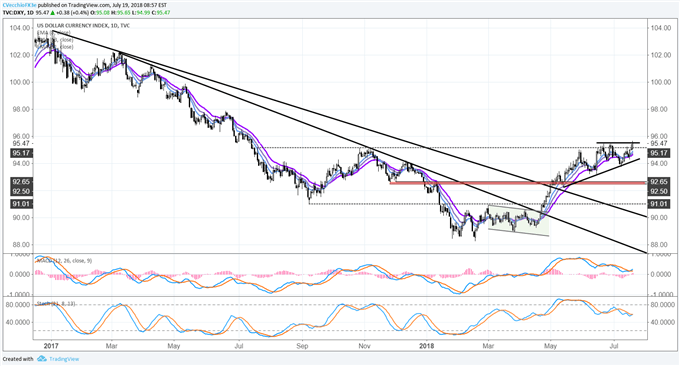 The DXY Index has been clear of both descending trendlines emanating from the January 2017 high as of this past May. Price action since mid-May has been more or less directionless, perhaps a consequence of an overly bullish market seeking a period of consolidation ahead of the next leg higher. The ascending triangle that's been forming over the past eight weeks suggests a continuation effort to the topside is gathering pace. 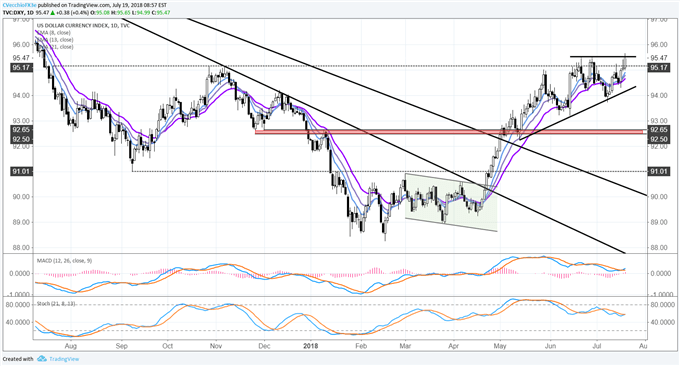 The US Dollar's (via DXY Index) technical posture continues to improve now that price is clearly above its daily 8-, 13-, and 21-EMAs. Both daily MACD and Slow Stochastics have confirmed 'buy' signasl in bullish territory after price developments through the first three days of the week.

A breakout resulting from the bullish ascending triangle forming would only be valid given a move through the June 21 bearish daily key reversal and June 27 to 29 evening doji star candle cluster highs at 95.53 - the key level to watch for through the end of this week.