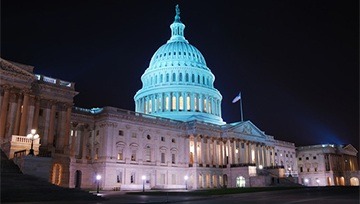 - The US Dollar has stabilized ahead of the testimony by Fed Chair Powell today, which should reiterate the committment to gradual policy tightening.

- The British Pound has slumped across the board as it appears possible that UK PM May will lose a key Brexit vote later on this afternoon.

- Retail trader sentimentcontinues to suggest a 'mixed' outlook for the majority of USD-pairs.

The US Dollar (via the DXY Index) has halted its two-day losing streak and has found itself buoyed by a mix of domestic and foreign influences ahead of the US cash equity open on Tuesday. The main driver of price action has been the British Pound, which while initially higher after the May UK jobs report, has since slumped as it looks like UK Prime Minister Theresa May is staring down a defeat in a key Brexit vote this afternoon.

The last few weeks have proven treacherous for the May-led UK government, after a string of defections over the direction of Brexit have raised the specter of a potential 'no confidence vote' in parliament. Now that the Labour Party is said to be backing a Tory rebel amendment to May's trade bill that would essentially force the continued participation in the European customs union if Brussels cannot be convinced to allow Britain into its own free trade agreement by January 2019.

The key Brexit vote is due in later today around 13 EDT/17 GMT, and should be the driving force behind price action in the post-European close/US afternoon session.

Elsewhere, traders are waiting for testimony from Fed Chair Jerome Powell as he climbs Capitol Hill for his semiannual testimony to Congress. Meeting with the Senate Banking Committee today and the House Financial Services Committee tomorrow, it would appear that Chair Powell is due to bring a mostly hawkish approach to his two days with lawmakers.

The fact of the matter is that the US economy is growing at a solid pace right now, with Q2'18 US GDP forecasts suggesting that growth could have hit +4% last quarter. Sprinkle in above-target inflation and a labor market that has produced an unemployment rate at multi-decade lows, and the evidence is clear that more "gradual tightening" is on the way.

While this perspective shouldn't be a surprise to market participants, the key variable in all of the commentary over the next two days will be on how Fed Chair Powell views externalities like the US-China trade war and how they're weighing on potential growth. Fed policymakers have thus far sidestepped any questions about the trade war, choosing to stay quiet on dressing down fiscal policy. But now that the trade war has evolved into a new phase, it seems like it will only be a matter of time before monetary policy officials begin to speak up and adjust policy as a result. 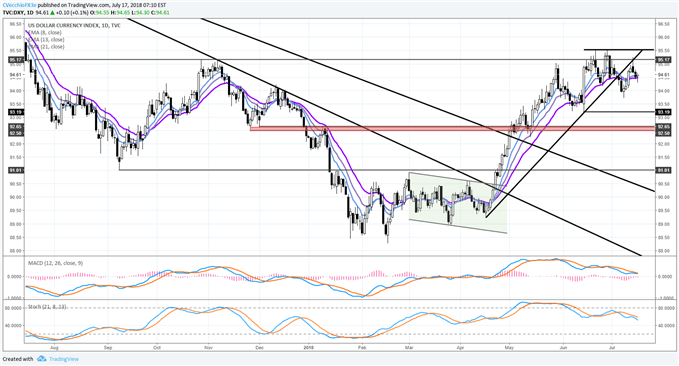 The US Dollar's (via DXY Index) technical posture has taken on a neutral perspective following the lack of follow through on the breakdown coupled with failure to reignite bullish momentum. Price is intertwined among its moving average envelope, with no clear direction from the daily 8-, 13-, and 21-EMAs. Neither daily MACD nor Slow Stochastics has reissued a 'buy' signal in bullish territory in recent days..

Only a move through the June 21 bearish daily key reversal and June 27 to 29 evening doji star candle cluster highs at 95.53 will truly reinvigorate US Dollar bulls; a break below 93.19, the June 14 bullish outside engulfing bar low, would fully jumpstart the downtrend.