- A lack of details in China's official response to the latest round of US tariffs suggests that the 'tit-for-tat' nature of the US-China trade war may be giving way to a more concilliatory attitude.

- Speculation that China won't escalate the trade war further has risk appetite improving once again, with USD/JPY rallying to its highest level since January 9 - even as neither US Treasury yields nor US stocks make significant advances.

The US Dollar (via the DXY Index) is rallying for the fourth consecutive day - its rallied every day this week thus far - as the ebb and flow of the China-US trade war has seemingly swung in a more positive direction. Risk appetite has been bolstered somewhat, with US equity futures pointing higher; although, the US Dollar has outperformed either US Treasury yields or US stocks thus far today.

After the US Trump administration announced plans for tariffs on another $200 billion of Chinese goods, Chinese officials have thus far failed to give a detailed response as they have in the past. This has lead to some to speculate that Chinese officials are looking for a way to ratchet down tensions, ending the 'tit-for-tat' spat that's left market participants increasingly on edge.

As a testament to the change in attitude towards the trade war, traders are reversing the sharp move higher seen in USD/CNH yesterday (the best day since January 2017). Offshore Chinese Yuan weakness was seen by some as an intentional move made by Chinese policymakers to help curb the impact of tariffs levied by the US. 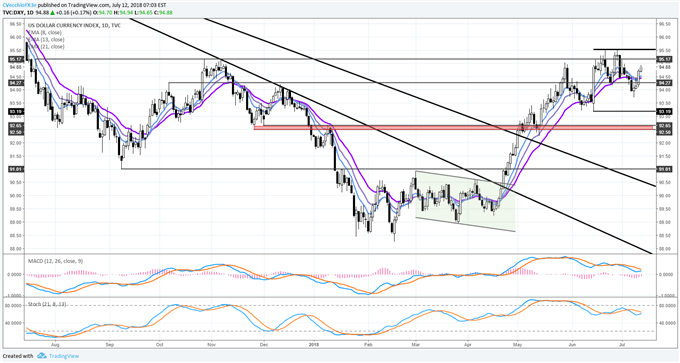 For now, the US Dollar's (via DXY Index) technical posture continues to improve, even if it isn't fully bullish on a momentum basis just yet. Price is now holding above the daily 8-, 13-, 21-EMA envelop in sequential order as the DXY Index has moved up to its highest level since July 3. While daily MACD and Slow Stochastics aren't trending higher, they have leveled out and are no longer falling; both remain in bullish territory suggesting that a return to the recent highs is possible. For breakout traders, a move through the June 21 bearish daily key reversal and June 27 to 29 evening doji star candle cluster highs at 95.53 is necessary.