- The Chinese Yuan is having its worst day since January 2017, and is set to close at its weakest level of the year versus the US Dollar.

- Dollar demand widespread; all components of the DXY Index are negative against their US counterpart.

The US Dollar (via the DXY Index) is having its best day in two weeks as risk appetite continues to fade amid rising trade concerns among China, the European Union, and the United States. All components of the DXY Index are in the red today against the greenback, including the Canadian Dollar even after the Bank of Canada raised rates and signaled its willingness to do so again this year.

With US President Donald Trump having announced plans for another $200 billion in tariffs on Chinese goods, it would appear that Chinese policymakers have once again resorted to allowing the offshore Yuan to weaken dramatically. USD/CNH is having its best day since January 2017 as a result.

While most G10 countries shun direct intervention in FX markets or targeted exchange rates, it seems rather blatant that policymakers are allowing the Chinese Yuan to weaken to insulate trade volumes amidst a trade war with the US.

Naturally, a sharp rise in the US Dollar against the backdrop of higher interest rates has weighed on higher yielding currencies and risk-correlated assets. Throw into the mix higher energy costs, and there is a future coming into focus that could see a bump in inflation and slowdown in growth across the globe over the coming months - particularly in emerging market economies. 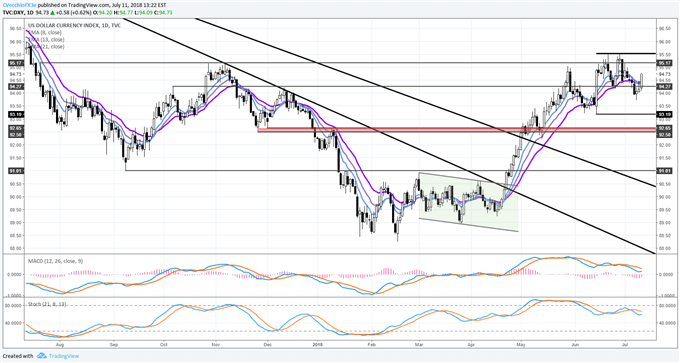 While today has produced the best day since June 27 for the US Dollar, it's not necessarily the right time to say that today also represents a material turning point for the world's reserve currency. True, a bout of risk aversion should typically benefit the US Dollar; however, historically, when it is at the center of a trade conflict, the greenback has depreciated.

Between the uncertainty that the US-China trade war poses and the prospect for the Federal Reserve to raise rates twice more this year, it would appear that near-term fundamental drivers for the US Dollar are a wash, leaving the greenback's outlook stuck in 'neutral' for the time being. Technically, with the bearish key reversal and evening star doji formations against 95.53 still intact, there is little reason to expect significant gains moving forward just yet.

Looking ahead to tomorrow, the next batch of inflation data for June will show that both measures of the US Consumer Price Index are above the Federal Reserve’s medium-term target of +2%. Headline CPI is due in at +2.9% from +2.8%, and Core CPI is due in at +2.3% from +2.2% (y/y). Ahead of the July FOMC rate decision later this month, these readings may help underscore a hawkish tone among policymakers that helps affirm the trajectory of monetary policy resulting in four cumulative hikes in 2018.

Given that a September hike is already 75% priced-in, it would seem that the June US CPI release can only have a limited positive impact on the US Dollar; a miss will leave result in bigger impact than a beat.