- Concerns continue to persist that the Trump administration will lead the US economy into a trade war with China, even as tensions with the EU ease.

- Not so much a negative for the US Dollar but rather a positive for other currencies, central banks besides the Fed are discussing tightening rates in the coming months.

The US Dollar (via the DXY Index) continues to trade lower through the first week of July and Q3'18, in an environment marked by low participation thanks to the US Independence Day holiday yesterday. But with the June US Nonfarm Payrolls report due out tomorrow, traders won't be sidelined for too long.

Looking ahead to the US jobs report tomorrow, expectations have already started to drop. Earlier today the June US ADP Employment report showed the economy added +177K jobs versus +190K expected. We'll have a better idea of where tomorrow's figures will land after the June US ISM Non-Manufacturing/Services report later this morning.

There's another layer of uncertainty, however. Last month, US President Trump tweeted out a positive message ahead of the data release that coincided with a strong jobs report; so the absence of commentary before tomorrow's report may, in effect, precondition market participants for a weaker jobs number. 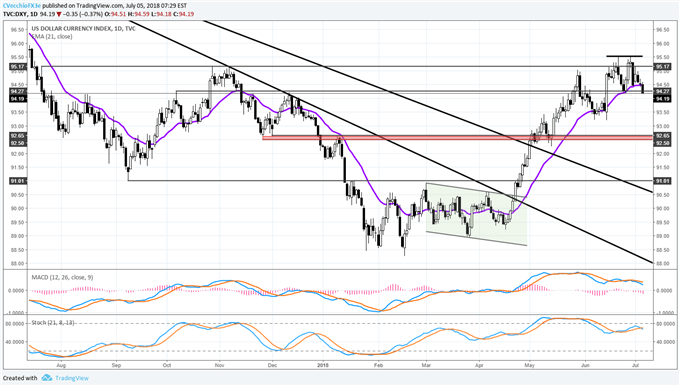 While not carrying the hefty weighting as the Euro, the British Pound and Canadian Dollar represent a sizeable portion of the DXY Index (cumulatively, 21%). The result has been the DXY Index retesting its daily 21-EMA; no two consecutive daily closes have come below the moving average since April 17 and 18. Failure below the daily 21-EMA through the end of the week would reinforce the topping signs seen over the past two weeks: the June 21 bearish outside key reversal; and the June 27 to 29 evening doji star candlestick cluster.