DXY Index Carving Out Second Straight Inside Day Before US Holiday

- The rapid depreciation by the Chinese Yuan in recent weeks had some market participants wondering if the currency was being used as a tool in the slow boiling China-US trade war.

- A compromise between the CDU and CSU has eased pressure from the Merkel government in Germany, giving the Euro some breathing room to recover.

- Sentiment for the US Dollar remains mixed as prices consolidate.

The US Dollar (via the DXY Index) is trading in a typical pre-holiday fashion, carving out a small range as rates of market participation stay low. The appearance of a second consecutive inside day bar suggests that traders are refusing to commit to a direction in the greenback in the first half of the week - a week cleaved in twain by the US July 4 holiday.

As is often the case when inside bars materialize, particularly in a consecutive fashion, traders appear to be in a holding pattern. Given the economic calendar this week, especially on the US data side, this is not necessarily a surprise: the releases of the US ADP Employment report and the US ISM Non-Manufacturing Composite (both Thursday) will help provide insight and shape expectations into the June US Nonfarm Payrolls report due on Friday.

Elsewhere, overnight most attention was paid to movements in the Chinese Yuan. As trade tensions between the US and China remain elevated, there was a growing belief that Chinese policymakers were intentionally allowing USD/CNH to appreciate as a way to counteract any negative ramfications from any trade fallout. Fears have started to crop up that a currency war could be occurring in tandem to a trade war.

Finally, the Euro has stabilized after an uncertain few days surrounding the future of the German government under Chancellor Angela Merkel. The continued alliance of the CDU and CSU has staved off any potential collapse for now, and the Merkel government's willingness to address immigration issues may soothe fears that the largest European economy won't be sucked into the whirlpool of populism. 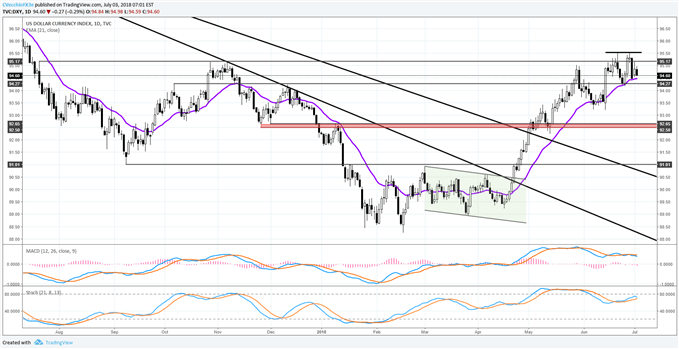 Following last week's month-end rebalancing that produced a US Dollar pullback as expected, not much technical progress has been made at the start of July and Q3'18. The DXY Index continues to consolidate between its daily 21-EMA (no consecutive closes below since April 17 and 18) and the late-June swing highs.

Dollar bulls may be be suited to view the DXY Index with a healthy dose of skepticism in the days ahead. The bearish daily key reversal on June 21 coupled with the evening doji star candle cluster between June 27 and 29 suggest that formidable resistance has formed at 95.53.

Putting into context the two consecutive inside day bars seen, it would appear that US Dollar bulls are facing a bit of exhaustion right now in the near-term.