US Dollar Gains Build as Trump Changes Tactics on Trade

- Instead of blocking Chinese companies from investing in American companies outright, the Trump administration will now use CFIUS to oversee purchases by foreigners.

- The slight change in tactic is seen as a much less aggressive approach towards China, suggesting that a US-China trade war may never truly materialize.

The US Dollar (via the DXY Index) is working on its second day of gains in a row as concerns about a full-blown US-China trade war continue to diminish thanks to a change in tactics by the Trump administration.

By choosing to use the Committee on Foreign Investment in the United States (CFIUS) to handle ownership transactions with Chinese buyers - thereby including the US Congress in the decision making- the Trump administration is taking a much less aggressive stance towards China than previously thought.

If the US executive branch is no longer acting unilaterally on trade issues and instead working with a legislative branch that is more open to free trade, odds of a serious trade war developing with China have dropped.

Generally speaking, such a change in tactic should be considered a positive development for the US Dollar, as a US-driven trade war would be a net-negative for the US Dollar. The news overnight is indeed producing a bullish reaction by the greenback, and as would be expected given that the US Dollar is trading like a risk currency, US equity futures are trading higher alongside the buck. 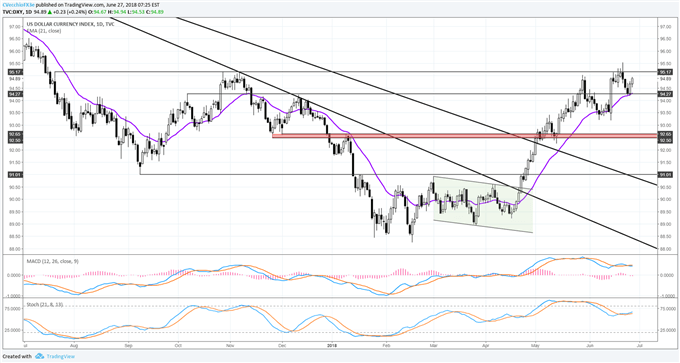 The bounce by the US Dollar over the past two days has come at a critical time for the DXY Index, with price having fallen back to the daily 21-EMA for the first time since the June 14 ECB rate decision. Throughout early-June, the daily 21-EMA was been a magnet for support in the DXY Index, with no two consecutive daily closes coming below the moving average since April 17 and 18.

More evidence that a US-China trade war will be avoided could be the catalyst necessary to help the DXY Index return back to its highs from earlier this month; for now, the bearish daily key reversal high at 95.53 is formidable resistance before the uptrend can be declared as having been resumed.