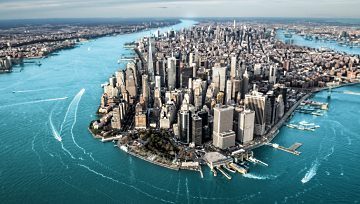 - Fed rate hike odds have followed US Treasury yields higher, with three more rate hikes now being priced in for 2018.

The US Dollar (via the DXY Index) has taken a significant step forward in its effort to shake off the downtrend over the past six months. Yesterday produced the first close above the descending trendline from the November and December 2017 highs, and in the process, may have ignited the early stages of an inverted head & shoulders neckline break.

The major catalyst behind the move higher is undoubtedly the sharp topside move in US Treasury yields over the past week. With the DXY Index eying its sixth consecutive day of gains, the US Treasury 10-year yield continues to flirt with a break above the psychologically significant 3.000% level after bottoming out at 2.714% on the first trading day of April. 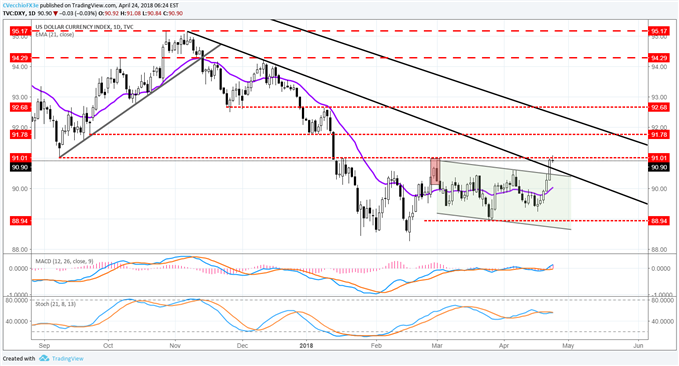 The residual impact from the move higher in US Treasury yields has been a steeper Fed rate hike pricing curve, which is now tentatively pricing in three more hikes in 2018: June (92% implied probability); September (75%); and December (51%). As we last noted on April 12, rising Fed rate hike odds have been finally filtering through into a stronger US Dollar, and a continued rise in December 2018 odds will only service to the greenback's benefit in the near-term.

For now, price still remains below 91.01, the 2017 low set on September 8 (which subsequently marked a morning doji star candle cluster failure in mid-January as well as the March 1 key reversal); a close through this level remains critical. But now that the descending trendline from the November and December 2017 highs has been broken, it looks like a serious attempt at a establishing a low is under way.