GBP/USD Falls Back to Trend Support from November

- Sentiment for the British Pound is now neutral.

The US Dollar (via the DXY Index) has extended its run of gains this week, on pace for its fourth consecutive day in the black amid a rise in US Treasury yields. USD/JPY continues to push higher despite US equity markets stalling, while EUR/USD has slipped back to trendline support dating to April 2017, the pivot lows seen before the first round of the French elections.

But the biggest mover over the past 24-hours has been the British Pound. Following Bank of England Governor Mark Carney's comments yesterday, overnight index swaps' implied probability of a rate hike next month dropped from near 85% to below 50% yesterday.

The BOE chief noted that there has been weakness in some recent data, all of which has come across the wires in the past week: the bevy of price data - CPI, PPI, and RPI - all came in softer than anticipated; despite the unemployment rate remaining at multi-decade lows, jobs growth and wage growth are uneven; and retail sales figures missed expectations.

What was once seen as a sure thing is now being drawn into question. Fellow BOE policymaker Michael Saunders' remarks earlier today has helped stabilize rate expectations, with OIS now pricing in a 52% chance of a move in May. 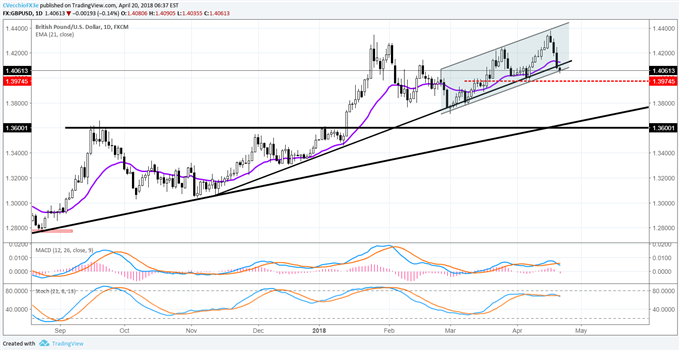 After completing the upside measured move in the bullish falling wedge earlier this week, GBP/USD has now fallen back to key uptrend support, both the ascending channel in place since the March 1 low as well as trendline support dating back to the November 2017 low.

For now, the weakness seen in the GBP-complex may just be nervous longs taking profit amid the injection of uncertainty over the near-term rate path. According to the CFTC's COT report for the week ended April 10, speculators were long to the tune of +8K net-long contracts. Unfortunately, when the update to the COT figures are released later today, the decline seen over the past 24-hours won't be reflected: they cover the period ended through April 17.

If GBP/USD is truly topping here, then a move below the April 5/6 swing low near 1.3975 will have to give way. Otherwise, given that the composition of voters appears set for either a 6-3 or a 5-4 vote in favor of a rate hike in May, it would reason that buying weakness in the British Pound ahead of the May policy meeting remains an opportunity for traders who had missed upside over the past few months.