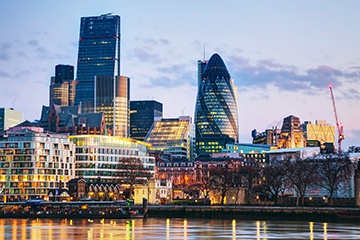 - Signs that a transition deal with emerge between the EU and the UK has given new life to the British Pound.

- Sentiment for the US Dollar remains mixed at the start of the week.

The US Dollar (via DXY Index) has given up earlier gains as traders continued to digest the ramifications of US President Trump's tariff announcement late last week. With Canada, Mexico, and now Australia exempted from the aluminum and steel tariffs, it's increasingly looking like the plan is more 'bark' than 'bite.' That said, a number of other countries and economic regions, like China and the Eurozone, haven't been granted exemptions and the prospect of a global trade war remains.

Accordingly, with negative trade headlines out of the United States cooling off a bit, and in consideration of the exceptionally light economic calendar on Monday, traders' attention has turned to domestic developments out of Japan and the United Kingdom as the top drivers for FX markets on Monday.

Will a Scandal Sink Abenomics?

A potential scandal has emerged close to Japanese Prime Minster Shinzo Abe, leading to speculation over whether or not the vaunted 'Abenomics' program - a cornerstone of which is a weak Japanese Yen - will remain in place. Taro Aso, the Japanese Finance Minister, is said to have altered documents to remove his and Abe's names from documents relating to the sale of public land to a school.

While FM Aso has strongly refused to resign, it is not a far stretch to believe that an erosion in trust with the current government may lead to its current policies being drawn into question. Implicitly, this would mean less support for the weak JPY policy. 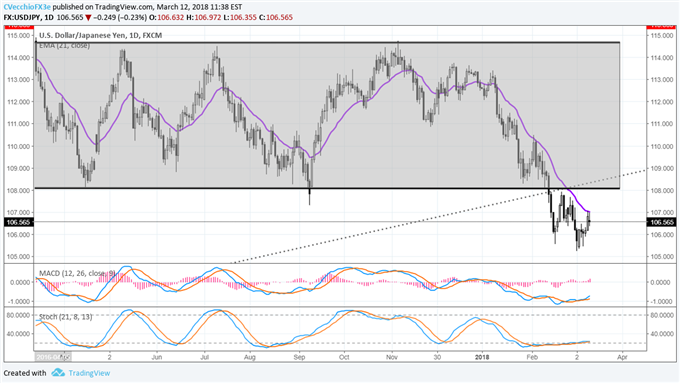 The timing of the potentially JPY-positive news comes as USD/JPY tests the daily 21-EMA, which has been the backbone of the downtrend in place since early-January. While a break through said moving average wouldn't mark the end of weakness - price remains on the downside of the 52-week range that defined 2017 - it would constitute a shift in the outlook from USD/JPY from 'bearish' to 'neutral.'

Similarly, price remains below the uptrend from the late-2012 and mid-2016 lows (dotted line on chart above), suggesting that there is a good deal of work to be done before a 'bullish' outlook can be once again assinged to the pair. The preference is to sell USD/JPY on rallies for the time being.

A Brexit Transition Deal is in the Works

The British Pound has been given a spark for gains at the start of the week as news emerged that a Brexit transition deal is in the works between the EU and the UK. After four days of talks between negotiators, the junior UK Brexit Minister Robin Walker announced that the transition deal could be announced in the coming days, which would give the UK two years beyond the March 2019 exit to implement new laws and regulations outside of the EU so as to avoid disruption to commerce. 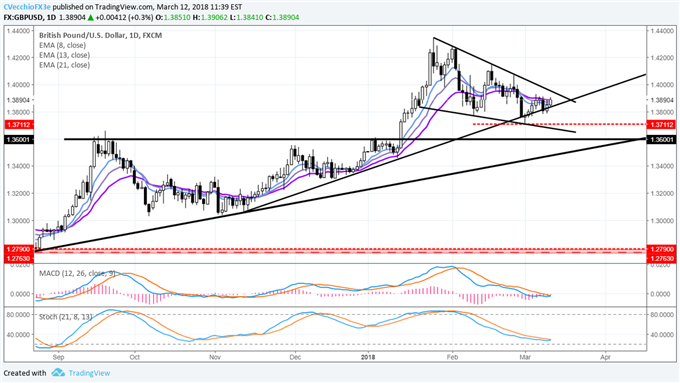 The positive news about the Brexit talks come at a time when not much as been going right for the UK in recent weeks (nor has anything been going wrong; the news flow has been decidedly bland). But the timing for GBP/USD couldn't be better: price has been hugging the uptrend from the November and December 2017 and January 2018 lows as support since the start of March.

Traders may now see that a bullish pennant is forming in GBP/USD. A close beyond 1.3950 this week on the back of positive Brexit developments would open up the door for a return to highs seen in January near 1.4345/50. Momentum has cooled considerably over the past two months even as price has held up, suggesting that the overbought readings seen in various technical indicators have been fully digested.