US Dollar, Japanese Yen Sink as 'Risk On' Sentiment Surges

- Both the Japanese Yen and US Dollar have been pigeonholed into the role of 'safe haven currencies,' with traders ditching both today.

- Signs that Congress is against US President Trump's tariffs plus a push for peace talks with North Korea have seen risk appetite improve.

- Retail trader sentiment continues to suggest a mixed trading environment for the US Dollar.

Is the US Dollar rally over? Developments since FX markets opened up Sunday in New York would suggest that traders may think so. While US President Trump's comments about starting a global trade war via aluminum and steel tariffs may have been the initial catalyst, knock-on developments have given traders little reason to continue to push the US Dollar higher.

Following the bearish daily key reversal on on March 1, which prevented the DXY Index from clearing the critically important 91.01 level - the 2017 low and resistance following the failed January 15 to 17 morning doji star candle cluster - the US Dollar has fallen back into its downtrend from the mid-January and early-February swing highs. 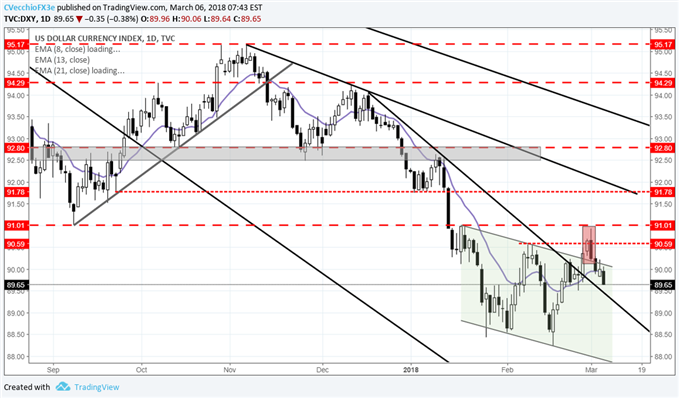 These developments in the DXY Index come against the backdrop of Fed rate hike expectations - the glide path of interest rates - continuing to firm up. Rates markets continue to price at least three rate hikes this year (March, June, and November have odds above 60%) with the implied probability of a fourth hike by December hitting 38% today.

The US Dollar's lack of responsiveness to the improved rate pricing structure adds further evidence to our belief that a regime change has transpired in FX markets and the greenback is now viewed as a 'safe haven' currency in the mold of the Japanese Yen, rather than the 'growth' currency it had traded as during 2015 through mid-2017.

Now that Congress is pushing back against President Trump's desire to enact tariffs and start a trade war, in conjunction with the Italian election results yielding no clear path to forming a government and news this morning that North Korea is willing to denuclearize so long as the security of the Kim regime is secured, traders are back to ditching the greenback in favor of higher yielding, risk-correlated assets.

For now, with global equity markets turning higher and traders fleeing the safety of bonds, 'risk on' sentiment is once again the theme du jour. But given the previous concern markets expressed when US Treasury yields rose too quickly - especially when the 10-year yield neared 3% - and the propensity for news flow out of Washington, D.C. to seemingly turn on a dime, we're not sure if the jump in optimism is anything more than a near-term knee jerk response rather than risk appetite fully turning the corner.