US Dollar Posture Continues to Improve; PCE Core, Powell Due Up

- Markets are pricing in less than a 1% move in EUR/USD, GBP/USD, USD/JPY, and Gold around today's testimony.

- Retail trader sentiment suggests a mixed trading environment for the US Dollar.

The US Dollar (via DXY Index) bottoming efforts continue to take steps forward, with price now at its highest level since January 18. Earlier this week, the DXU Index closed above two key trend levels yesterday: the downtrend from the December 18, January 11, and now February 21 highs; as well as the descending channel top off of the January 17 and February 8 highs.

The improving technical posture has the DXY's sight set on 91.01, the former 2017 low and swing high in mid-January. A weekly close through said level would confirm a near-term bottom for the US Dollar. 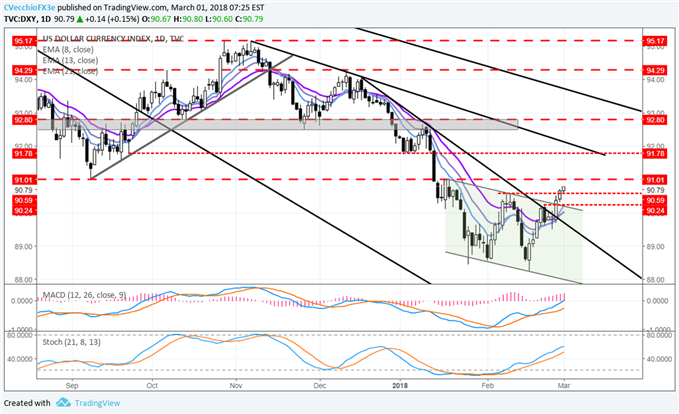 Traders should continue to look at USD-pairs on a case-by-case basis given that a broad bearish bias is no longer applicable. EUR/USD is in focus, which constitutes 57.6% of the DXY Index. A close through 91.01 in DXY, where there was a failed morning doji star candle cluster between January 15-17, corresponds with a move below 1.2365 in EUR/USD, where there was a failed evening doji start candle cluster during that same period in mid-January.

We'll be watching for two things in today's session. First, Fed Chair Jerome Powell is set to climb Capitol Hill again today to testify in front of the Senate. Following his comments on Tuesday, the US Dollar gained (with US stocks falling) as the prospect for a faster pace of rate hikes were made clear. Now, the odds of a fourth rate hike in 2018 have risen to 37%.

The other item of interest today is the Core PCE report. According to a Bloomberg News survey, US consumer prices were higher on a monthly-basis in January, although price pressures remain weak. The Fed’s preferred gauge of inflation, the PCE Core, is due in at +0.3% from +0.2% (m/m) and +1.5% unch (y/y). The expectation for a reaction depends largely on the perception that the Fed will either accelerate or decelerate their current path of projected rate hikes.

As noted in the January FOMC meeting minutes, "Members agreed that the strengthening in the near-term economic outlook increased the likelihood that a gradual upward trajectory of the federal funds rate would be appropriate.” It would appear that traders hoping for a catalyst for a stronger US Dollar are better off looking elsewhere.