Will January FOMC Minutes Cement the US Dollar Bottom?

- The DXY Index continues to recover ground after Friday's bullish key reversal; seems to be more of a positioning unwind rather than a realignment with yields.

- Both the British Pound and the Euro are trading lower after Euro-Zone PMIs disappointed, UK jobs data missed expectations.

- Retail trader sentiment suggests a mixed trading environment for the US Dollar this week.

The US Dollar (via the DXY Index) is working on its fourth consecutive day of gains, building further on the bullish daily key reversal seen at the yearly lows on Friday. In part, the US Dollar's rebound has been aided today by disappointing data out of Europe: Euro-Zone PMI readings missed expectations; and the UK jobs report showed an unexpected uptick in the unemployment rate.

Focusing on the British Pound, traders should turn their attention to the group of Bank of England policymakers speaking at 9:15 EST/14:15 GMT today given recent inflation and labor market data. Despite weakness on headline GDP (due out later in the week at +1.5% annualized), price pressures remain stubbornly high and real disposable income remains under pressure.

Amid strong signaling from BOE policymakers in recent weeks, the British Pound has started the year as the second best performing currency versus the US Dollar as rates markets have dragged forward the expected timing of the next 25-bps rate hike from August to May (greater than a 60% chance, according to overnight index swaps). Further losses by the British Pound could be stunted today should the Carney-Broadbent-Haldane-Tenreyro discussion confirm the market's more hawkish expectations. 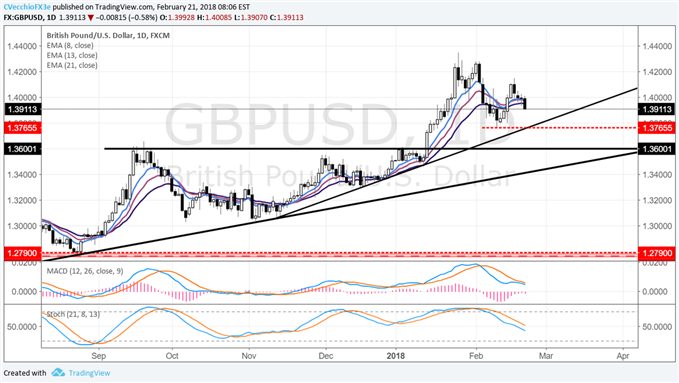 Otherwise, the rebound in the DXY Index appears to be due to the short dollar positioning unwinding ahead of the January FOMC meeting minutes release this afternoon at 14 EST/19 GMT.

The Federal Reserve’s January policy meeting was a placeholder for the US Dollar in more ways than one. Just a month removed from the December rate hike, policymakers were staying the course. There has been a good deal of chatter suggesting that the FOMC will signal that four rate hikes this year are possible, which speculation around may be helping the greenback rebound. 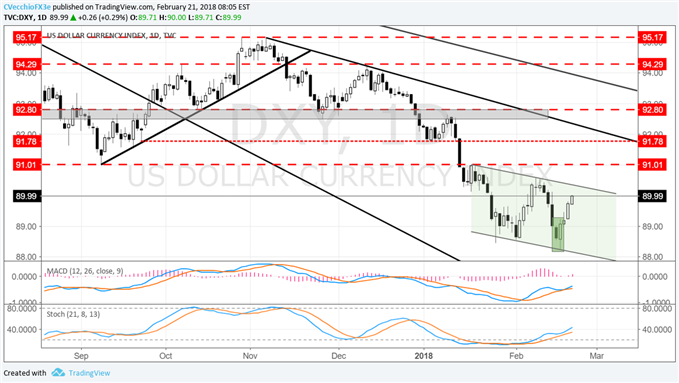 But the minutes themselves shouldn't leave a lasting impact this time around for a different reason: it was the last meeting under the purview of former Fed Chair Janet Yellen. Now that Jerome Powell sits atop the FOMC, and there is a new composition of relatively more hawkish voters, the path that the FOMC will take going forward will likely be somewhat different.

Likewise, the January FOMC meeting took place before the violent selloff in US equity markets and the explosion in volatility. This could lead to additional speculation that a hawkish policy shift is due when Fed Chair Powell finally sits atop his first meeting. Ultimately, it would stand to reason that market participants will put little stock in the words of an outgoing Fed Chair and FOMC panel.

Accordingly, the outlook for the DXY Index hasn't changed: the key level traders still need to watch out for before a sincere bottom can be called is still 91.01.