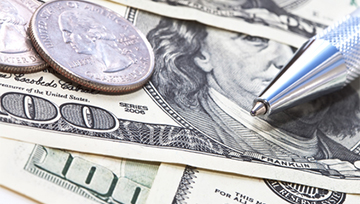 US Dollar Bounces, but Hasn’t Bottomed Yet - Key Levels

- After gaining for six straight days, the DXY Index lost ground yesterday and is looking at its second consecutive loss today.

- Failure by the DXY Index to get back above 91.01 suggests that more pain may be ahead.

- Retail trader sentiment suggests a mixed trading environment for the US Dollar through the end of the week.

Amidst the fire and fury of equity markets last week, the US Dollar was seemingly gaining back ground in the capacity of a safe haven. Yet having seen equity markets stabilize somewhat now, the US Dollar is turning lower once again, and the DXY Index's losses since markets opened Sunday in New York have now erased all of the gains seen since last Wednesday.

Noticeably, despite the ongoing climb in the US Treasury 2-year and 10-year yields - the latter of which hit a four-year high yesterday - the US Dollar just can't seem to catch a bid. This relationship has broken down sharply in recent months, but really since central banks besides the Federal Reserve began signaling that the era of ultra-loose monetary policy was coming to an end.

In fact, given the disconnect between the US Dollar, US Treasury yields, and US stocks, and more generally, that between the US Dollar and Fed funds expectations, there is a strong case to be made that a "regime change" has occurred (if you've been with me in any strategy sessions over the past month, this is a phrase we've used quite liberally).

The National Bureau of Economic Research says that regime change is "the tendency of financial markets to often change their behavior abruptly and the phenomenon that the new behavior of financial variables often persists for several periods after such a change." In the case of the diving dollar, it's rather apparent that behavior has changed abruptly - especially since the passage of the tax reform bill in Q4'17 (given the trajectory of the US deficit and debt, another US rating's downgrade this year seems very possible). 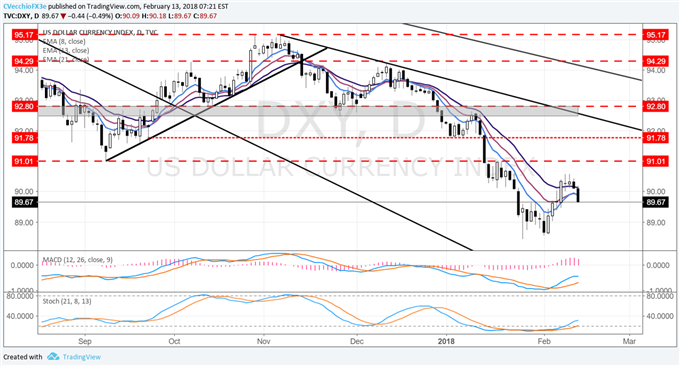 As the US Dollar goes through these growing pains of forging new relationships with different asset classes, it's best to be cautious and treat recent price action as merely a bounce, but not a sincere bottoming effort. True, daily Stochastics and MACD have turned higher; but they remain embedded deep in bearish territory. Yes, the DXY Index turned above its daily 8-, 13-, and 21-EMAs last week; but is back below all three today.

The key level traders need to watch out for in the DXY Index before a sincere bottom can be called is thus 91.01. The DXY Index put in its 2017 bottom at 91.01 on September 8, and since breaking through said level on January 12, price hasn't looked back. The morning doji star candle cluster that formed between January 15-17 - topping out at 90.98 - proved fruitless.