- The first FOMC meeting of 2018 will likely be its most uneventful one, as it is Chair Janet Yellen's last meeting before Jerome Powell takes over and a new, more hawkish composition of policymakers rotates onto the voting committee next week.

- Accordingly, without a new Summary of Economic Projections (SEP) or a press conference, there's little that the FOMC can do to stop the bearish US Dollar momentum from continuing this week.

- Retail trader sentiment has soured on the US Dollar once again.

Upcoming Webinars for Week of January 28 to February 2, 2017

The US Dollar (via DXY Index) has slipped to fresh weekly lows and what would be a fresh low close for 2018, should it fail to rebound the remainder of Wednesday. Market participants are rightly overlooking US President Trump's first State of the Union address as, in recent history, it's been rare to see any legislative follow through on the vision the president lays out (at least as far as this analyst remembers that being the case under Obama, Bush, or Clinton).

Instead, attention is rightly tuned to the first Federal Reserve policy meeting of 2018 today. Nevertheless, it doesn't look like the US Dollar will be bothered one way or the other by the FOMC meeting, for several reasons.

There's another dimension to today's FOMC meeting that limits the potential for a signifcant turn in the US Dollar: it is Janet Yellen's last meeting as Fed Chair. Should she have been reappointed? Given that every Fed Chair has been reappointed over the past 39 years, and that she oversaw a successful tenure - inflation is stable at or below +2%, the unemployment rate is at cycle lows, credit risk is low, and equity markets are at all-time highs - there is a strong argument to made that she should still be at the helm.

But I digress. The reality is that Jerome Powell will be taking over the leadership next week, with a new panel of FOMC voters being introduced as well. Accordingly, market participants may not take today's policy statement too seriously: after all, many of its authors will no longer be pulling the policy levers the next time the FOMC convenes in March (and that FOMC composition should be more hawkish).

Accordingly, with neither a new Summary of Economic Projections nor a Janet Yellen press conference, the Fed won't do anything meaningful at all. Rates markets are continuing to eye March, June, and December for rate hikes this year, and the policy statement won't change that perception. 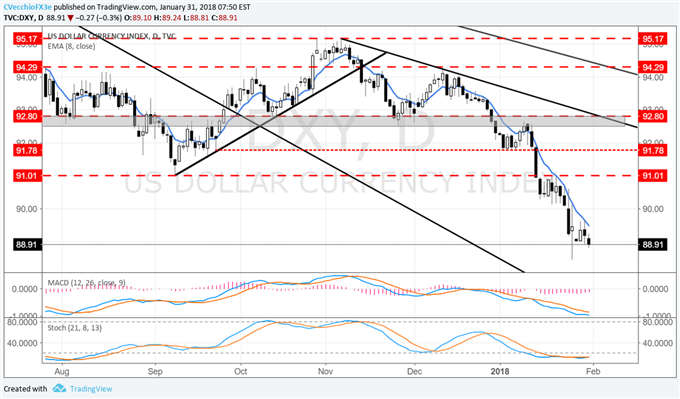 If nothing is going to change with the FOMC today, then there is little reason to think of today as a turning point in the US Dollar's broad downtrend. The DXY Index remains below its daily 8-, 13-, and 21-EMAs, while MACD and Slow Stochastics continue to trend lower in bearish territory. Bearish momentum is firm indeed, and until price closes back above the daily 8-EMA (no close above since January 11) then the bearish bias remains in place.

Against this backdrop, several USD-pairs look poised to continue the moves that have developed at the start of 2018. See the above video for technical considerations in the DXY Index, EUR/USD, USD/CAD, USD/JPY, and GBP/USD.