- After dropping to more than a three-year low yesterday, the DXY Index is trading higher for the first time since January 9.

- Return of US liquidity after holiday may not mean the US Dollar automatically catches a bid as true price discovery resumes thanks to the looming government shutdown.

- Retail trader sentiment points to a bearish trading environment for most USD-pairs.

The US Dollar (via the DXY Index) is working on its first day in the black since January 9, but whatever incremental gains were built up during the Asian trading session on Tuesday have started to fade through European hours ahead of the US cash equity open. Even though the economic docket is lighter today out of the US, traders will be paying increased attention to the US Dollar in the coming days.

While the return of liquidity after a market holiday may typically that traders will try and reverse some of the price action in illiquid markets, the US Dollar isn't enjoying the return of higher participation rates for one reason: the looming US federal government shutdown this Friday. 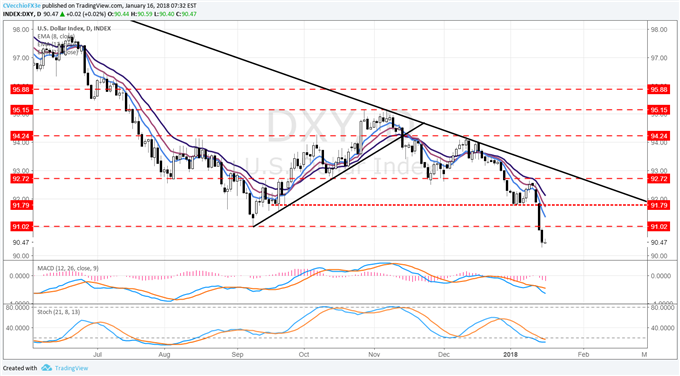 For a few weeks, it seemed as if the passage of the tax reform bill would buy the White House and Congressional Republicans some good will on Capitol Hill and among the public at large. Yet still less than a month removed from the tax legislation being signed into law, it appears that US fiscal policymakers are still the collective albatross around the US Dollar's neck that they were back in 2017.

Now, the burden for the US Dollar to carry is that of a potential government shutdown quickly approaching this Friday. With Democrats holding out on a funding deal as a way to bring Republicans to the table on immigration, partisan tendencies may very well get in the way of a comprehensive solution besides 'kicking the can down the road' on the budget once more. A lack of clarity on US fiscal policy, particularly when one singular party is in control of the White House, the Senate, and the House of Representatives, is proving to hurt the US Dollar more and more.

What this all means for traders is that any short-term rebound that we see in the DXY Index without accompanying headlines suggesting a government shutdown will be avoided is a rebound that should be sold, not treated as a bottoming effort. Nor should traders put too much weight on other information as they search for catalysts.

Today's UK CPI data is a good example of something superficially important. Unlike inflation reports in previous months, the December release barely matters to the British Pound. Markets know that the November rate hike was a one-off event; it was not the beginning of a rate hike cycle. Inflation will need to persist above +3% through Q1'18 if rates markets are going to pull forward the timing of the next hike - currently pegged at August 2018 - in a meaningful way that impacts the Sterling.