- The return of liquidity to FX markets has helped the US Dollar wipe away its losses from last week.

- Meanwhile, Brexit headlines are turning up favorably for the Sterling.

- Retail trader sentiment points to continued mixed trading conditions in the US Dollar through the end of this week.

Upcoming Webinars for Week of November 26 to December 1, 2017

The return of liqudity to FX markets this week has meant that price discovery has been in full force. Accordingly, some of the moves made by the majors last week, in particular EUR/USD, have been reversed as some of the optimism around the Euro-Zone PMI reports may have been overdone. Concurrently, with headllines about the progress of tax reform legislation in the United States starting to turn hopeful again, the DXY Index has found all its needed to justify a reversal of last week's losses. 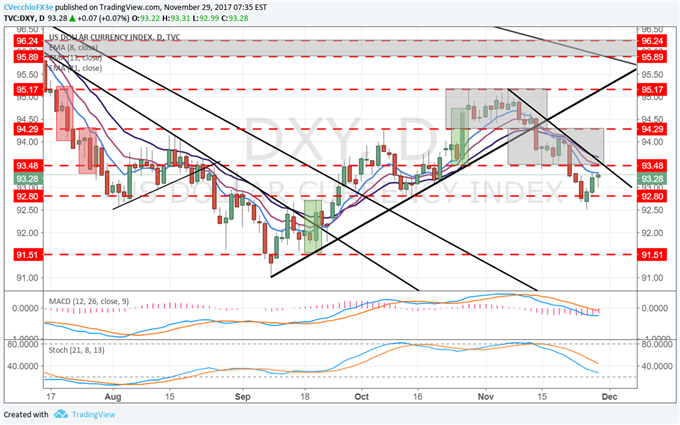 The DXY Index found support near the October swing lows around 92.80, piercing the low in what could be described as 'illiquid' conditions - thereby suggesting it's not a true representation of the market. As such, we find ourselves maintaining a slightly bearish bias towards the DXY Index with a clear caveat: if price breaks back above 93.48 (October 26 bullish outside engulfing bar low and daily 13-EMA) then the downtrend from the November 7 high is likely over. 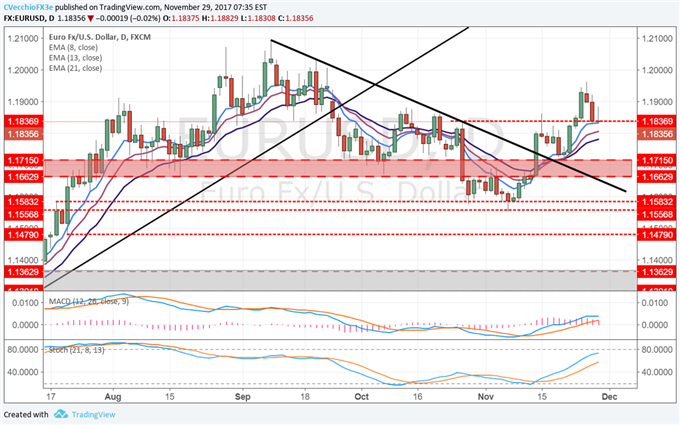 After clearing out the October 26 bearish outside engulfing bar high last week, EUR/USD has been hit negatively by the return of liqudity to markets. There haven't been any material developments to suggest anything other than the moves last week were driven by the holiday conditions, little more. While the uptrend from the September low is still in place, a close below 1.1835 today could signal that the EUR/USD reversal is finished in the near-term.

Elsewhere, we're watching GBP/USD as a break of the multi-month consolidation may be afoot. Price broke down into the 1.3018 to 1.3340 range on October 1 and has not traded outside of it since then. 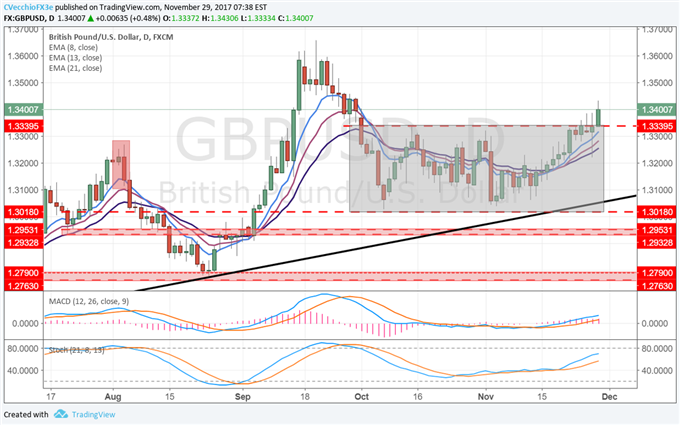 The nearly two months of consolidation haven't been without drama: neither a BOE rate hike nor questions over UK Prime Minister Theresa May's leadership have proven meaningful enough to force a reckoning. However, now that it appears the UK is willing to accept the €100 billion liability for leaving the EU, the Brexit negotiations appear to be turning earnestly in the right direction. A close through 1.3340 today would suggest that a more bullish bias across the GBP spectrum would be appropriate.