Despite US Dollar Woes, AUD/USD & NZD/USD Begin Next Legs Lower

- The DXY Index found support again near the October 26 bullish outside engulfing bar low at 93.48.

- Two places the US Dollar hasn't been struggling?: AUD/USD and NZD/USD.

- Retail trader sentiment now points to a greater likelihood of further US Dollar losses against the Euro and the Yen; gains possible against the commodity bloc.

The US Dollar's drop (via DXY Index) back towards its October 26 low this week was a sure sign that non-monetary policy factors are driving the global reserve currency: since October 26, Fed funds futures first fully priced-in a 100% chance of a 25-bps rate hike in December. Monetary policy has been thus relegated to the background, with the limelight being occupied by the progress of tax reform legislation. 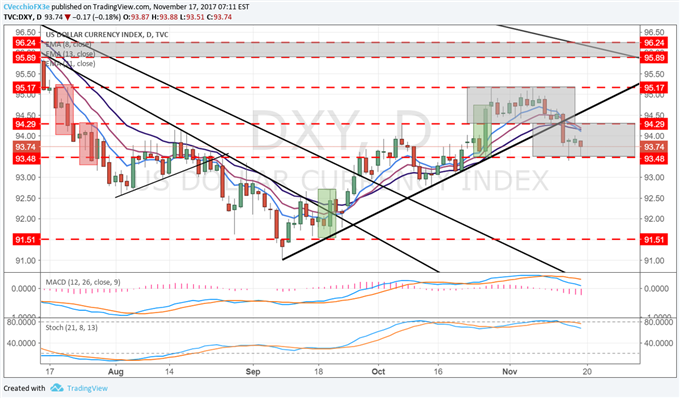 Despite bouncing off of the October 26 low twice this week (including earlier today so far), the US Dollar remains vulnerable in the near-term, having just broken the three-week range from October 26 as well as the uptrend from the September 8, 20, and October 13 lows coming under pressure as well.

Further technical damage was done to the greenback this week. The neckline of what could be viewed as a potential inverse head & shoulders pattern at 94.29 has been breached. Momentum has started to swing lower as well, with the DXY Index trading below its daily 8-, 13-, and 21-EMAs, and MACD and Stochastics trending lower (albeit in bullish territory still).

It is curious to note, however, that two major currencies which don't have representation in the DXY Index have proven to be rather weak in recent days: the Australian and New Zealand Dollars. Both currencies have been dealing with their own littany of issues, from declining base metals prices and a neutralized RBA for the Australian Dollar, to a new government and threat to the RBNZ's independence for the New Zealand Dollar.

Likewise, the rise in short-term US interest rates means funding costs for corporatations and sovereigns in the 'emerging market' basket will be increasing, as much EM debt is denominated in US Dollars. Typically, we view the Australian and New Zealand Dollars as developed market proxies for economic activity in the emerging world. 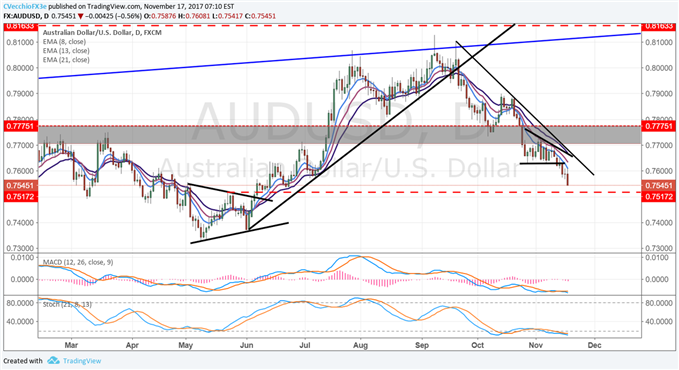 AUD/USD has proven reliably weak since the beginning of September, when US Treasury yields bottomed and the US 2-year yield began its march to fresh yearly highs and its highest level in nine-years.

This week, price broke out of a descending triangle to the downside, after falling back below a dynamic zone of support and resistance since August 2016 between 0.7700 and 0.7775. While price may find some support in the near-term at the June swing lows around 0.7515/20, momentum is firmly to the downside with price holding below its daily 8-, 13-, and 21-EMAs as MACD and Stochastics trend lower in bearish territory. 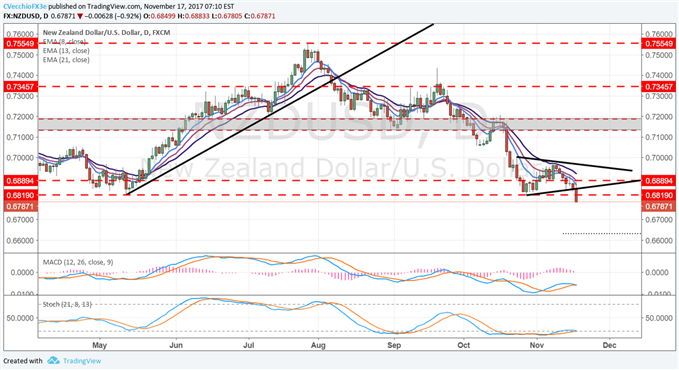 NZD/USD has been in a downtrend since July, but losses really began to accelerate in mid-October following the election of Jacinda Ardern as the next prime minister of New Zealand.

The combined threats of removing the RBNZ's independence (thereby increasing the risk of a policy mistake that hurts the economy over time) and reducing the ability and ease of foreigners to buy homes in New Zealand (a sign the government may not be friendly to foreign direct investment) undercut the New Zealand Dollar's appeal as a 'safer' high yielding currency.

Today, price is breaking out of a symmetrical triangle to the downside, and in the process clearing out the May and October swing lows near 0.6815/20 - setting a fresh yearly low in the process. With price holding below the daily 8-, 13-, and 21-EMAs, and MACD and Stochastics trending lower in bearish territory, momentum is solidly negative. The symmetrical triangle target calls for a move down to 0.6630/35 in the coming weeks.

Beyond AUD/USD and NZD/USD, given the recent weakness in US equity markets and the implications for USD/JPY, traders may also want to give the AUD/JPY and NZD/JPY charts a glance before the week is out.

Read more: US Dollar Bias Shifts to Neutral as New Range is Carved Out