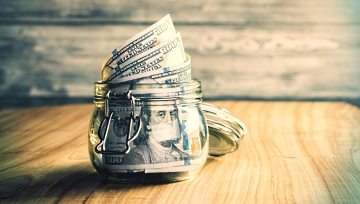 DXY Index Posture Remains Bullish Ahead of US NFPs Tomorrow

- US Dollar gains have steadied in recent days as US Treasury yields' rise have stalled.

- Given impact of hurricanes on southeastern United States in September, there is a high likelihood that there is interference in the jobs number, which as a result won't reveal too much about the underlying state of the US labor market.

The US Dollar rally may have shifted into a lower gear this week, thanks in large part due to US Treasury yields stabilizing, but that doesn't mean the recent bull run is over yet.

Ahead of the September US Nonfarm Payrolls report tomorrow, the DXY Index retains its bullish technical posture: price is holding above the daily 8-, 13-, and 21-EMAs; and both MACD and Stochastics continue to trend higher above their respective signal or neutral lines. The greenback's attempt at basing remains intact with December Fed rate hike expectations continuing to rise, now near 80%.

Typically, the key issue surrounding recent US Nonfarm Payrolls reports has been whether or not the US labor market will continue to indicate that it is strong enough to justify a more aggressive pace of Fed tightening. Normally, with a report the scope and scale of the Nonfarm Payrolls report on the horizon, one would be inclined to tie near-term outcomes for the US Dollar to the details released in the jobs report.

Yet the forthcoming report tomorrow may offer little if any meaningful insight into trends underlying the US labor market. Current expectations for the data are beyond modest, with the Unemployment Rate expected to hold at 4.4%, and the headline jobs figure to come in at +77K. Why so low? The spat of hurricanes that slammed the southeastern United States is almost certain to have a negative impact on job creation figures.

Even then, a soft headline figure won't do much to deter the Fed from tightening policy again this year. Recall that In October 2015, San Fran Fed President John Williams wrote in a research note that he believed growth of +100K jobs per month was enough to sustain the growth in the labor force and maintain the current unemployment rate. In December 2015, Chair Janet Yellen reiterated this same view. And, in late-February 2017, she noted that the economy can maintain its current unemployment rate by producing between +75K and +125K jobs per month.

By the Atlanta Fed Jobs Growth Calculator, assuming a 4.4% longer term unemployment rate, the economy only needs +113K job growth per month to sustain that level through the end of 2017. From this point of view, the US Dollar's bullish posture should remain intact through the end of the week, regardless of what tomorrow's jobs data reveals.

See the above video for technical considerations in the DXY Index, EUR/USD, GBP/USD, USD/JPY, AUD/USD, USD/CHF, GBP/JPY, GBP/CHF, Gold, and US yields.

Read more: US Dollar Weighed by Pullback in US Yields; Key Data Today