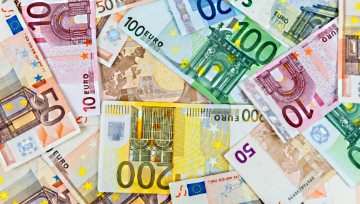 How Will Draghi's and Yellen's Jackson Hole Speeches Impact EUR/USD?

- Both Fed Chair Yellen and ECB President Draghi are in the limelight today, though how they might impact markets differs.

- Looks for volatility to spike in the second half of the US trading session; thin liquidity and low participation overall means the chances of an outsized move are higher.

- Retail crowd positioning has stabilized over the past few days, with the US Dollar off of extreme levels.

Upcoming Webinars for Week of August 27 to September 1, 2017

After weeks of speculation, FX markets are finally staring down the barrel at the most important set of policy speeches to come from central bankers in quite some time. With both Federal Reserve Chair Janet Yellen (10 EDT/14 GMT) and European Central Bank President Mario Draghi (15 EDT/19 GMT) set to deliver key note speeches at the Jackson Hole Economic Policy Sympoisum, expectations for significant movement in EUR/USD are running higher.

Yet given recent changing circumstances in markets - mainly inflation underperforming across major developed economies, and the Euro surging this year while the US Dollar tanked - suggest that the supposed optimistic tones laid out by Draghi and Yellen will bear small but meaningful differences that could upend EUR/USD by the end of the day.

From the Euro's perspective, it's biggest problem is itself: EUR/USD is in excess of the ECB's 2017 year-end expectation of 1.0800 by nearly +10%. So, while Draghi is making his first appearance at Jackson Hole in three years, and given that at his last appearance in 2014 he pre-announced the ECB's QE program, it doesn't appear likely that Draghi will use today's opportunity to make any sort of statement that could provoke further Euro appreciation. While Draghi may not explicitly talk down the Euro, his failure to signal stimulus withdrawal may be enough to provoke more profit taking in the Euro (recall that Euro longs are at extreme levels).

On the US Dollar's side of things, it appears that any benefit that may come by way of Yellen's speech will be purely incidental. The Fed Chair is speaking on financial stability, which isn't directly related to the policies that would drive the US Dollar up or down. But the aspect to consider is that if Yellen outlines conditions that make financial stability appear on track, then logically it stands to assume that Yellen would also feel that credit is loose enough that the Fed can afford to hike rates again soon without disrupting economic growth. Implicitly, then, good news on financial stability is good news for the US Dollar.

It is worth reminding that these speeches will be coming in the second half of the day, when Asian and European liquidity is offline for the week with the weekend around the corner. Similarly, it being a Friday afternoon during one of the final weeks of the summer, market participation levels are going to be even lower than usual. Illiquid market conditions coupled with significant catalysts like the Yellen and Draghi speeches today make for an environment ripe for volatility: don't be shocked if EUR/USD is still moving meaningfully in the final two hours of the trading week. 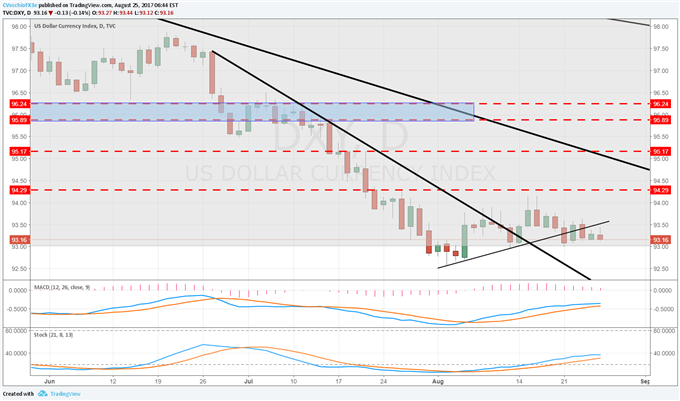 Accordingly, the topping potential for EUR/USD remains on a close below 1.1714. Concurrently, we're looking for a US Dollar bottom (via DXY) to be established should price clear the July 26 outside engulfing bar at 94.29. Until then, more grinding sideways price action should be expected to continue.