- US Dollar initially moves lower with US yields slipping as the GDP Price Index and Core PCE (measures of inflation) both drop in Q2.

In the second quarter, the US economy grew by double the pace of growth in the first quarter, coming in at +2.6% from +1.2% previously. Overall, the report slightly missed expectations, which were at +2.7% before the release (having risen from +2.5% over the course of the week). While the headline of the GDP release was a nice improvement, other aspects of the report were fairly mixed, weighing on the US Dollar.

Indeed, Personal Consumption, the largest component of GDP (thanks to the US consumer accounting for nearly 70% of GDP), improved to +2.8% from +1.9%. Yet, two separate measures of inflation – the GDP Price Index and Core Personal Consumption Expenditures (Core PCE) – both slowed from Q1 to Q2. Overall, 2017 is on pace to be the twelfth year in which growh is below +3% (and GDP hasn't topped +4% since 2000).

The decline in inflation readings is perhaps the most glaring aspect of the report, and the prime cause of the US Dollar move lower following the releases this morning. After all, it was just this past Wednesday when the Federal Reserve raised concern over recent low inflation readings, to the extent that low inflation below their +2% target for a prolonged period of time could ultimately prove to prevent the Fed from hiking rates again this year. As was the case before the GDP report, rates markets continue to price in March 2018 as the most likely period for the Fed’s next 25-bps rate hike.

Here’s the data pushing the US Dollar lower this morning as US yields drop and inflation expectations sink: 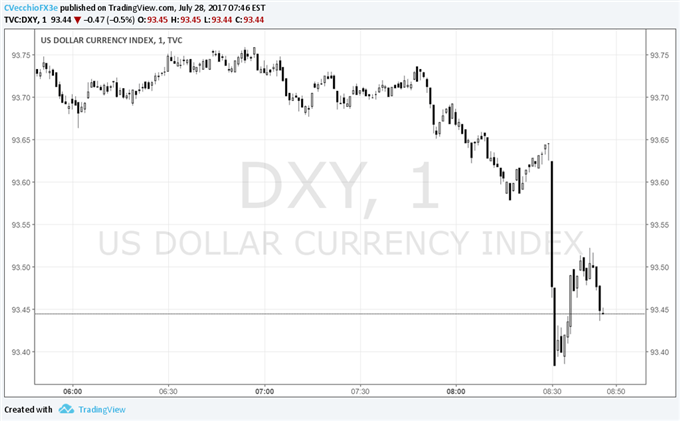 Following the data, the US Dollar Index (DXY) fell from 93.64 to 93.44 at the time this report was written, after falling as low as 93.38. With US Treasury yields (both 2-year and 10-year) slipping back, USD/JPY fell back below 111.00 and EUR/USD traded north of 1.1740. For the remainder of the session, expect volatility to calm down and liquidity to thin out: it is a summer Friday, after all.

Read more: Will GDP Data Help the US Dollar Finish the Week Positive?

View our longer-term forecasts with the DailyFX Trading Guides